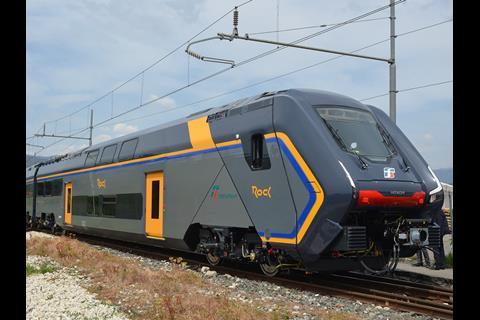 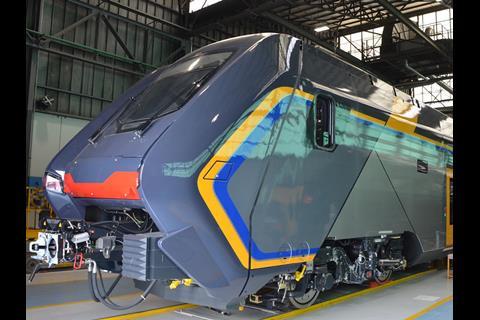 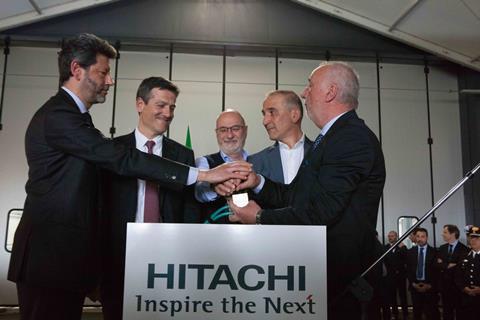 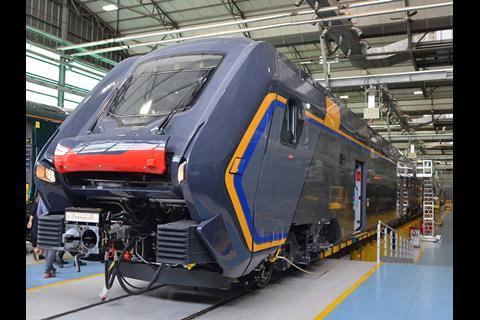 ITALY: The first Rock double-deck regional electric multiple-unit for national passenger operator Trenitalia was unveiled at Hitachi Rail Italy’s Pistoia factory on April 18. It will now go for trials at the Velim test circuit in the Czech Republic, ahead of the fleet’s entry into passenger service from spring 2019.

Trenitalia selected Alstom and Hitachi Rail Italy as the winners of two framework agreements for the supply of regional trainsets on June 28 2016. Hitachi was awarded Lot 2, a €2·6bn framework covering up to 300 high-capacity EMUs.

Hitachi announced the design under the name Caravaggio, but Trenitalia has adopted the brand name Rock, following on the musical theme of its regional passenger fleet which includes Alstom Jazz and Minuetto and Pesa Swing diesel multiple-units (a different product from the Polish manufacturer’s Swing tram family). The five car Rock EMUs will be designated Class ETR521, and four-car units ETR421.

‘We are changing the quality of transport for Italian commuters with our investment plan’, said FS Group CEO Renato Mazzoncini at the roll-out. ‘The Rock EMU is a wonderful train that will be operational in the Italian regions where Trenitalia has won tenders, including Emilia-Romagna where we signed long-term operatring contracts. By 2023, Trenitalia will renew 75% of its regional fleet and will halve the average age of trains from the current 20 to 10 years.’

Trenitalia’s Chief Executive Officer Orazio Iacono said manufacturing of the units was ‘proceeding rapidly’, and the unveiling of the first trainset was ‘an important step’ towards the operator’s goal of offering ‘comfortable, clean, safe trains, with improved on board information systems’, offering equivalent quality to high speed trains. ‘We wanted Rock to be designed around commuters’ requirements, and those of Trenitalia’s onboard crews’, he said. ‘Rock is more comfortable, sustainable and accessible to people with reduced mobility. The great acceleration of the new train will improve punctuality.’

The light alloy bodies and wide passenger areas with roof-mounted traction equipment are intended to provide a low weight per passenger and a high passenger capacity per unit length. According to the Hitachi the styling is meant to provide a ‘made in Italy’ look, and signify a ‘generation gap’ from current double-deck rolling stock.

Hitachi Rail Italy Rolling Stock COO Giuseppe Marino said the design ‘combines the best technologies from the whole group’, adding that manufacturing is being undertaken in ‘state-of-the-art’ factories. ‘This trainset is now leaving Pistoia’, he said ‘but it also belongs to the other Hitachi Rail plants in Napoli and Reggio Calabria, and in the world, all of which contributed to this project’.

The new trains are partly financed by FS Group using a €600m green bond issued in November 2017. The Rock EMUs are expected to offer 30% lower energy consumption than the current fleet and are more than 95% recyclable, enabling them to obtain ‘white certificates’ for investments in energy efficiency.