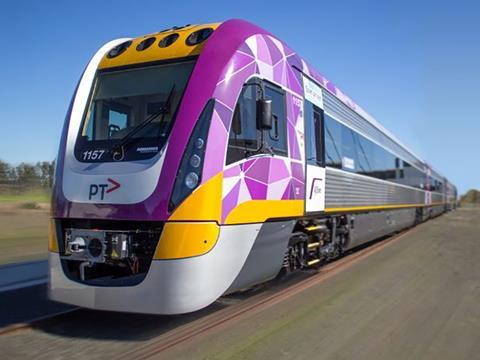 AUSTRALIA: The Victoria state government has ordered a further batch of VLocity diesel multiple-units from Bombardier Transportation, in order to meet growing demand on regional routes radiating from Melbourne.

Due to enter service in 2021, the six three-car units will follow on from the nine sets ordered in 2017 for delivery this year. They will be funded from an A$340m allocation in the state’s 2019-20 budget, which provided for up to 18 new units to be ordered to replace older loco-hauled trainsets. A further A$50m will be spent on refurbishing 75 existing VLocity DMUs with new seat coverings and other minor repairs.

Like the earlier units, the additional sets will be built at Bombardier’s Dandenong plant, helping to secure around direct 100 jobs as well as further jobs in the supply chain. Visiting the factory on September 3, Minister for Public Transport Melissa Horne explained that the government had committed to ‘deliver new VLocity trains for regional Victoria and that’s exactly what we’re doing. We are improving services for passengers and supporting hundreds of Victorian jobs as we continue to build new trains and refurbish our existing fleet.’

According to the state government, V/Line is now operating more than 2 000 regional trains each week, providing a 40% uplift in services since 2014.