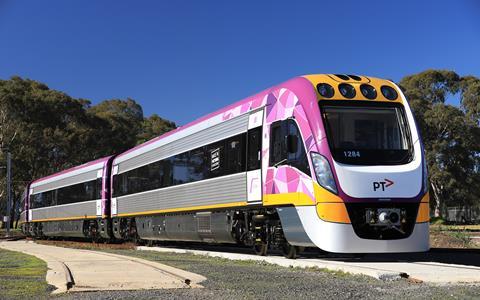 AUSTRALIA: The government of Victoria has exercised an option for Bombardier Transportation to supply a further 18 three-car VLocity diesel multiple-units from its Dandenong factory.

The order announced on September 15 has been placed under an agreement initially signed in 2018. It covers 12 additional DMUs for V/Line’s 1 600 mm gauge routes, as well as the first six VLocity units to be built for 1 435 mm gauge operation.

The standard gauge DMUs are scheduled to replace loco-hauled trainsets on the route from Melbourne to Albury-Wodonga once the A$235m North East Line Upgrade is completed next year. They will include more comfortable seats for the longer journey, USB chargers, six luggage racks and overhead luggage storage, catering facilities and six wheelchair spaces with nearby companion seats.

‘Alongside the upgrade of the North East Line, these trains will deliver a more modern, comfortable journey for passengers travelling between Melbourne and Albury – we can’t wait for them to hit the tracks’, said Minister for Transport Infrastructure Jacinta Allan.

The broad gauge sets will have a modified drivers’ cab, dedicated storage area for bicycles and accessibility improvements.

All the new DMUs will feature mobile phone signal boosters.