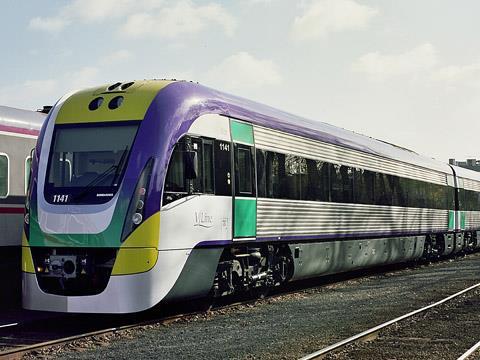 Australia: The government of Victoria has ordered an additional Bombardier VLocity three-car DMU for A$17m, taking the order to 43 cars.

Canada: Toronto Transit Commission has ordered 10 six-car Rocket metro trainsets from Bombardier as a C$160m option on orders for a total of 420 cars placed in 2006 and 2010.

Denmark: DSB is to buy 67 double-deck coaches it currently leases from Ascendos.

Europe: GHH-Bonatrans has awarded Valdunes a contract to supply 22000 forged wheels by July 2015.

Lohr has produced an upgraded version of its Modalohr wagon for carrying semitrailers, with modifications to enable UIC certification. It has slimmer lateral beams in the loading platform to get the dimensions within the UIC standard envelope, while the sidebeams have been lowered to permit loading by overhead crane. The lower tare weight enables an increased payload.

Israel: ISR has taken delivery of the first six of 72 double-deck coaches Bombardier is supplying pre-equipped to operate with electric locos on routes which are to be electrified at 25 kV 50 Hz. They have a top speed of 160 km/h rather than 140 km/h, more advanced braking and energy management systems, and comply with European fire standards for long tunnels. Bombardier is also to modify the existing fleet by 2020.

Japan: At a cost of ¥18bn, JR Hokkaido has ordered four 320 km/h Series H5 10-car trainsets from Hitachi and Kawasaki Heavy Industries to operate on the Hokkaido Shinkansen.

Kazakhstan: EBRD is to provide leasing company Olzha with US$9m to purchase 100 wagons and a loco to meet market demand, in addition to a US$24·8m loan approved last year.

Kyrgyzstan: KTJ confirmed an order for a second batch of Kazakh-built GE TE33A locos on March 31, after trials with two ordered in 2012.

Poland: PKP PLK has signed an agreement with PKP IC for the installation of ERTMS equipment on two EP09 locomotives, which will be provided by Newag Gliwice.

Russia: Freight One has signed a 10bn rouble sale and lease back deal with Sberbank Leasing covering 5 300 wagons, saying it will improve the structure of the debt portfolio by extending the maturity profile and diversifying funding sources.

This month Ural Locomotives expects to complete a prototype third module for twin-section 2ES10 Granite electric locomotives, increasing their rating to 13·2 MW and maximum load from 6300 tonnes to 9000 tonnes.

RZD has approved the design of 61-4501 and 61-4502 baggage cars developed by Transmashholding’s Tver plant. A variant of the 160 km/h stainless steel cars would offer a heated compartment for temperature-sensitive goods.

Turkey: TCDD has invited tenders to supply 10 high speed trainsets, with three years of maintenance. It expects to require at least 90 trains to support the expansion of the high speed network, although some may be provided under the ‘National Train’ programme to develop a locally-designed 250 km/h EMU.