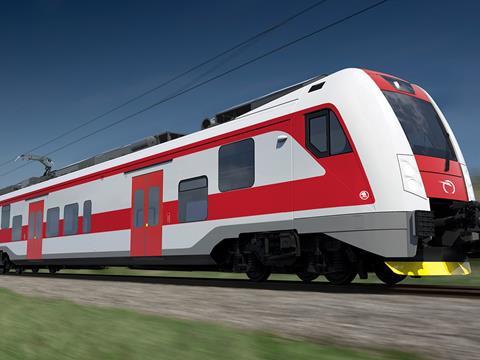 SLOVAKIA: National passenger operator ZSSK has awarded a consortium of Škoda Vagónka and ŽOS Trnava a €160m contract to supply 25 dual-voltage electric multiple-units for use on regional services around Žilina. Stadler had also bid for the contract.

The EMUs will be based on Škoda’s RegioPanter family. The order covers 13 three-car units with 247 seats, and 12 four-car sets with 343 seats. The partly low-floor 3 kV DC/25 kV 50 Hz air-conditioned EMUs will have an entry floor height of 550 mm, multi-functional areas with tip-up seats and space for bicycles or prams, wheelchair-accessible toilets, audio-visual information systems, LED lighting, 230 V power sockets and free wi-fi. Maximum speed will be 160 km/h.

Škoda will be responsible for delivery and approval of the first two trainsets, while ŽOS Trnava will assemble the remaining units using bodyshells, bogies and traction packages supplied by Škoda. Delivery is scheduled within 24 months.

The order is the largest single contract to be awarded by ZSSK since it was formed in January 2005, and will be co-funded from the EU’s Integrated Operational Programme 2014-20. ZSSK had called bids in April 2017, following an unsuccessful tender which was revoked in December 2016 on the recommendation of the European Commission because of problems with the planned allocation of EU funding.