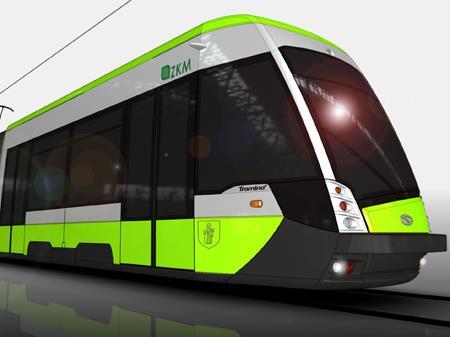 POLAND: Representatives from the city of Olsztyn signed a €30m contract with Solaris Bus & Coach on September 21 for the supply of 15 low-floor trams to operate on Poland's first new tram system in 55 years.

Due for delivery in 2014, the bidirectional Tramino cars will be 29·3 m long, similar to the GT6N-ZR design that Solaris is supplying to Jena. The three-section cars will be carried on a single bogie under each section. They will have six sets of double doors on each side and 36 seats, giving a total capacity for more than 230 passengers.

Construction of the 1 435 mm gauge network officially began on September 12, when FCC Construcción started work in Plonskiego Street. The 11 km network is due to be completed by the end of 2014, at an estimated cost of 250m zloty including the 600 V DC overhead power supply.