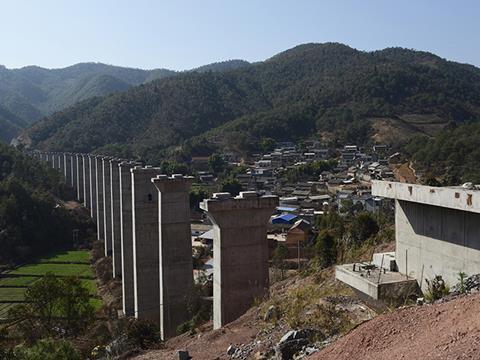 LAOS: Construction of the planned standard gauge corridor running north-south through Laos could begin next month, according to officials in Vientiane. The railway would be an extension of China Railways’ existing line running south from Kunming in Yunnan province towards Vietnam.

The Chinese and Lao governments agreed to develop the project in 2009, but disagreements over funding and labour have stymied progress since then. Minister of Public Works & Transport Dr Bounchanh Sinthavong has told local media that preparatory works for the 417 km mixed traffic railway should begin in November ‘if all goes well’ and would take around five years to complete.

Intended to form part of a trans-ASEAN spine linking China with Singapore, the railway would enter Laos at the border with China at Louang Namtha, and run south through Luang Phabang to the capital Vientiane. From there it would be extended into Thailand, using one of the planned standard gauge routes which are to be developed under a Sino-Thai co-operation agreement. Currently the only railway in Laos is a short metre-gauge stub running across the River Mekong from Nong Khai in Thailand to a railhead at Tha Na Laeng.

The construction budget for the line through Laos is US$6·8bn, of which 40% is to be funded through the Chinese and Lao governments, with China taking a 70% share of this contribution. The remainder would be funded through private investors, according to local media reports. China has also offered a series of low-interest loans worth US$500m to Laos in the event that Vientiane cannot meet its US$840m obligation. These loans would be secured against the revenues from bauxite and potash mines in Laos.

Given the exceptionally mountainous terrain the railway would have to be built through, 76 tunnels totalling 195 route-km would be required, plus 154 bridges accounting for a further 65 km. Five stations would be built to serve population centres along the route, along with up to 31 sidings, terminals or other access points. Although often described as a high speed line, maximum speed for passenger trains would be 160 km/h and 120 km/h for freight.