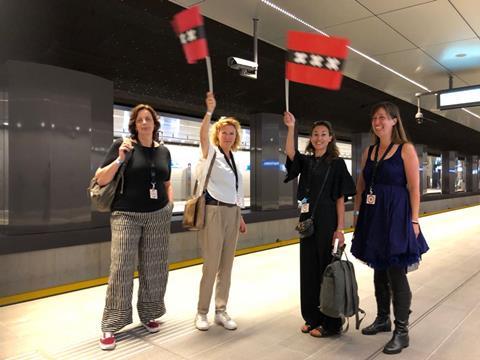 The line was then opened to pre-registered users. Regular revenue services began the following day, when there was am associated wider reorganisation of the city’s bus and tram services.

The initial section of the line is 9·8 km long with eight stations. Starting at Noord (previously known as Buikslotermeerplein), it runs on the surface to Noorderpark, then enters a tunnel beneath the River IJ, Centraal station and the city centre to serve Rokin, Vijzelgracht, De Pijp and Europaplein stations before resurfacing to reach the southern terminus at Zuid railway station. The opening of the metro under the river means Amsterdam is ‘not a city on the IJ, but a city around the IJ’, said Halsema.

Construction began in 2002, when the line was expected to open in 2011. However, difficult tunnelling conditions and two ground collapses at Vijzelgracht in 2008 delayed completion, increasing the project cost from €1·4bn to an estimated €3·1bn.

The 6 km tunnel under the city centre required innovative construction methods, including freezing the surrounding land to stabilise the soft soils and excavating the tunnels under pressure using Herrenkneckt TBMs.

The section of the line passing beneath the historic Centraal station and the adjacent River IJ is in an immersed concrete tube installed by contractors Heijmans and Strukton.

Alstom has supplied its Urbalis 400 CBTC for the line. The €100m contract awarded in 2012 also includes deployment on the existing lines 50, 51, 53 and 54, totalling 39 km and 40 stations, a new control centre and the installation of onboard equipment on 90 trainsets. CBTC is expected to be in operation on the existing lines by 2019, reducing headways to provide a 25% increase in line capacity.