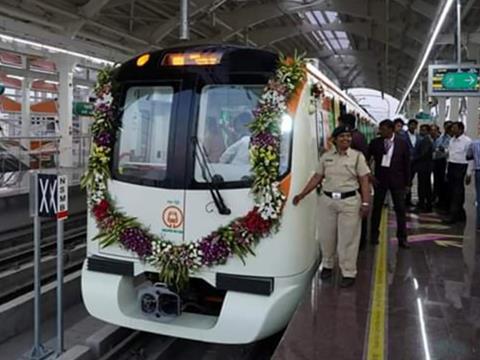 INDIA: Nagpur celebrated the opening of its first metro line with two days of free travel following the inauguration of the first phase of the north-south route on March 8.

The 11·8 km route runs between Sitabuldi in the north and Khapri in the south via the airport, serving 11 stations. The 7·1 km northern section is elevated and the rest of the route is at-grade. Sitabuldi will be the interchange with the future 18·6 km east-west metro line, which would serve 19 stations between Prajapati Nagar and Bansi Nagar.

CRRC Dalian has supplied a fleet of 23 three-car trainsets to operate on both lines under a Rs8·51bn order placed in March 2017 that also includes 10 years of maintenance. The stainless steel bodied 25 kV 50 Hz trainsets have a maximum speed of 80 km/h and capacity for 974 passengers. Siemens has supplied CBTC signalling.

Prime Minister Narendra Modi laid the foundation stone for the metro in August 2014, and test running started in October 2017 using two Hyundai Rotem trainsets on loan from the Hyderabad metro.

The north-south route is due to be extended at both ends in December. A northern extension from Sitabuldi to Automotive Square would add 6·7 km and seven stations, while a 1·2 km southern extension would take the line to Metro City and add two stations.

Plans for a second phase, which were formally adopted by the Maharashtra state government on January 8, would add a further 48·3 km and 35 stations to the network.