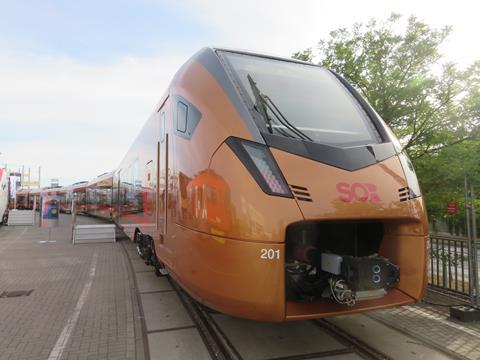 The copper coloured eight-car low-floor units will replace SOB’s existing rolling stock on the St Gallen - Luzern Voralpen Express route from 2019. From 2020 trains of the same type will enter service on the historic Gotthard route under a partnership arrangement with Swiss Federal Railways. SOB Chief Executive Thomas Kuechler said it was thanks to the new Traverso trains that SOB would be able to play an active role in the Swiss long-distance market.

The spacious interiors have been designed to cater for different types of traveller; seating has been laid out to suit both commuters and leisure passengers. Space is provided for skis and cycles and 68 of the 359 fixed seats are in first class. There is also a designated family area.

SOB’s original order placed in 2016 was for six eight-car and five four-car sets for St Gallen - Rapperswil services. The operator exercised an option for 11 more eight-car sets for Gotthard services from Zürich and Basel to Locarno in December 2017.