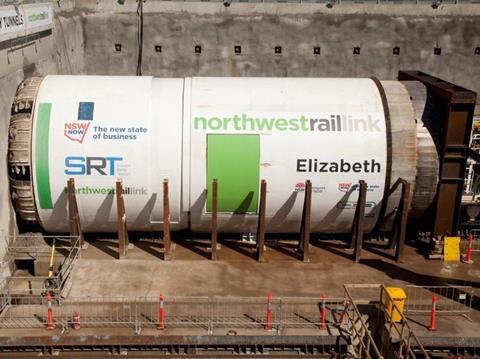 Elizabeth is the first of four hard rock tunnel boring machines delivered by NFM Technologies. The 120 m long, 6·99 m diameter TBM was assembled at Bella Vista over the past seven weeks, and will be joined by three more.

‘The North West Rail Link has been a top priority for this Government and I am pleased to announce today that the next two tunnel boring machines are also expected to be in the ground before the end of this year, ahead of schedule’, said NSW Minister for Transport Gladys Berejiklian.

A consortium of Thiess, John Holland and Dragados received a tunnelling contract worth A$1·15bn in June 2013. This covers 15·5 km twin-bore tunnels between Epping and Bella Vista.

The North West Rail Link is due to open in 2019 as the first stage of Sydney Rapid Transit. The A$8·3bn project comprises a 23 km route from Chatswood to Epping on a converted heavy rail alignment, continuing through the tunnel to emerge onto an 4 km elevated section to terminate at Cudgegong Road in Rouse Hill. Opening is planned for 2019.

An extension through the city centre to Bankstown in the southern suburbs is proposed.