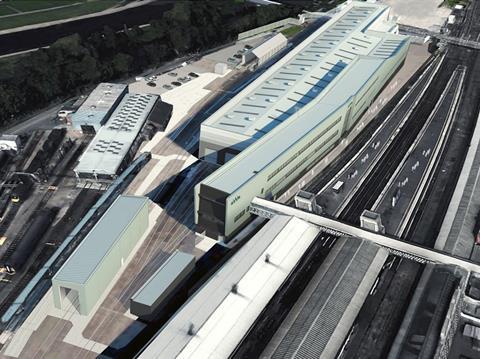 Network Rail has applied for planning consent for a rolling stock depot at Exeter which would be used by train operator Great Western Railway from mid-2019. Situated alongside the existing facilities at Exeter St David's station, it would include modern facilities for servicing, cleaning and maintenance, as well as office space and staff welfare facilities.

London Overground services on the 22 km route between Gospel Oak and Barking resumed on February 27, following a phased eight-month closure for 25 kV 50 Hz electrification work. However, design errors and the late delivery of materials and structures mean that the project has not been fully completed, and further closures will be needed before the start of electric services in early 2018.

Installation of free passenger wi-fi on Arriva Trains Wales' Class 150, 158 and 175 DMUs has begun with completion planned for mid-April, following testing using one unit from each class. 'We are investing nearly £50m to roll out free, fast and reliable wi-fi on trains and I am delighted that passengers of ATW are set to be among those to benefit', said Transport Minister Paul Maynard. 'We already require new franchisees to offer free wi-fi as standard and are determined that 90% of all trains will have access to wi-fi by the end of 2018.'

Govia Thameslink Railway is asking passengers who had season tickets for its Southern-branded services last year to check if they are eligible for compensation equivalent to a month's travel under a one-off scheme launched by the Department for Transport following severe disruption during 2016.

Virgin Trains is to expand its customer call centre in Newcastle by 50%, creating up to 45 jobs as it brings its web support team in-house.

Network Rail is due complete early in 2019 a £2·3m package of accessibility improvements at Warwick station, funded under government's Access for All programme. Lifts and ramps are to be installed to provide step-free access to the platforms from the subway which connects them.

Nomad Digital's contract to provide passenger wi-fi on Northern Ireland Railways services has been extended for a further five years and expanded to cover the Translink bus fleet.

Transport for Wales is undertaking consultation on what users want from the next Wales & Borders franchise which is due to start in October 2018. 'We inherited a franchise which was let on a zero-growth basis and no longer fully meets the needs of a modern Wales', said Welsh Economy & Infrastructure Secretary Ken Skates. 'We're keen to ensure that our new service takes full account of what passengers want, and provides not only for current requirements but also allows for future growth, quality improvements and is able to adapt to ever-changing technology.'

At a cost of £900 000, Network Rail is extending Platform 2 at Northallerton station by 20 m to accommodate the Hitachi IEP trainsets due to enter service on the East Coast Main Line next year. This follows the start of work at Durham to build a 40 m platform extension.