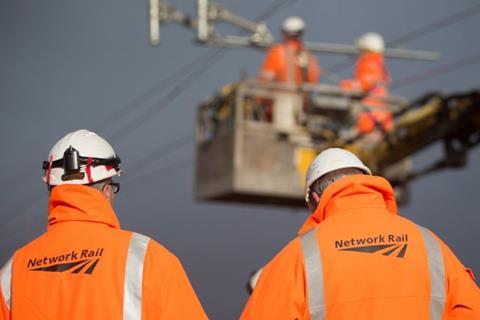 UK: Issuing an update on Network Rail’s impact on passenger train performance on January 21, the Office of Rail & Road said it had put the infrastructure manager ‘on a warning’ for poor service in the North West & Central region.

ORR said the cause of delays was split roughly 50:50 between train operators and NR, which is considered to be responsible for external factors including fatalities, trespass, vandalism and extreme weather. These account for around a third of delays.

At a national level NR’s contribution to passenger train delay-minutes was 58%, down 1·1 percentage points compared with the previous year.

However, there are variations across the country. In the North West & Central region, where the operators include Northern and Trans-Pennine Express, NR’s contribution to delays ‘remains a concern’, ORR said. Performance deteriorated in 2018, and failed to recover during 2019.

As a result, ORR is to investigate the detail of NR’s recovery plan and monitor whether it is doing all it reasonably can to improve.

In response, NR Chief Executive Andrew Haines said ‘there is no quick fix, but fix it we will’, noting that ‘a cross-industry taskforce has been pulled together to tackle the problems head-on.’ This would need ‘more reliable assets, a much more reliable train plan and more robust operator resource plans’, he said.

‘Our infrastructure is performing well with reliability in a lot of places at record high levels. But recovering from any small incident or issue, be that a fallen tree, a broken-down train or track fault, on a congested and clogged network, remains our biggest challenge.’