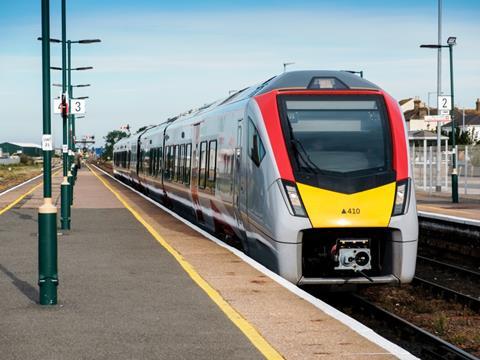 UK: The first of 38 three- and four-car electro-diesel multiple-units being supplied by Stadler to operate regional services in East Anglia began revenue operation on Abellio's Greater Anglia routes from Norwich to Lowestoft and Yarmouth on July 29.

The first Stadler multiple-units to operate in the UK, the Class 755 FLIRT trainsets are the first of more than 1 000 new vehicles that will replace the entire Greater Anglia fleet over the next few years. Funded by Rock Rail as part of a £600m package which also includes new inter-city EMUs, the 24 four-car and 14 three-car units are intended to operate routes in Norfolk, Suffolk, Cambridgeshire and Essex.

As well as providing more capacity than the older DMUs that they are replacing, the air-conditioned sets have been designed for improved accessibility, with retractable steps to allow near-level boarding at all stations. Plug sockets and USB charging points are provided, along with onboard wi-fi.

Formally approved for passenger service on July 10, subject to some final validation testing, the Class 755s will initially replace loco-hauled trainsets on the Yarmouth and Lowestoft services. They will then be rolled out onto the Norwich – Cambridge line, displacing Class 170 Turbostar DMUs for transfer to Wales. According to Greater Anglia, ‘the majority’ will be in service by the end of this year. They will be maintained at Norwich Crown Point depot, which is currently being upgraded at a cost of £40m.

The first Stadler-built Class 745/0 inter-city EMUs for the London – Norwich route are currently on test and are expected to enter service in the autumn, followed by similar Class 745/1 EMUs for Stansted Express airport services and Class 720 Bombardier Aventra EMUs for outer-suburban operations.

‘This is an important and significant day, and one we have all been looking forward to’, said Greater Anglia Managing Director Jamie Burles. ‘We were committed to beginning our transformation in summer 2019 and we’ve done just that. Our new trains will transform rail travel across the region, bring wider economic, social, business, tourism and environmental benefits. It is the largest wholescale replacement of trains by any train company in the UK.’

According to Rock Rail CEO Mark Swindell, ‘these are some of the first trains to enter service in the UK financed through pension funds and insurance companies. This long term, highly competitive funding enables significantly better value for money to passengers and taxpayers over the life of the trains’.

From the archive: Class 755 on test at Velim