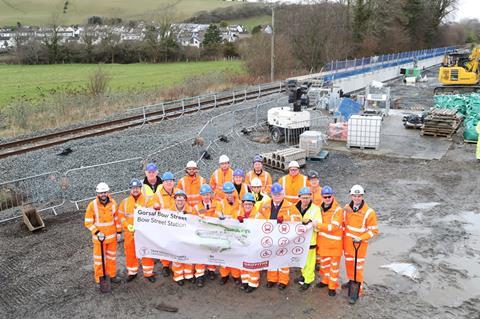 UK: Transport for Wales has launched work on Bow Street station on the Cambrian line between Aberystwyth and Shrewsbury. Opening is scheduled for later this year.

The £8m project is being undertaken by TfW, Network Rail and Ceredigion County Council with funding from the Welsh Government and the Department for Transport’s New Stations Fund.

The station will be close to the UK Innovation & Research Campus which is being developed by Aberystwyth University, and will provide access between the new site and the University’s main campus in Aberystwyth. It will also serve as a park-and-ride railhead to reduce congestion in Aberystwyth town centre.

‘Our vision for railways includes the opening of new stations and the improvement of connectivity across all regions in Wales’, said the Welsh Government’s Minister for Economy & Transport Ken Skates on January 13. ‘This is the beginning of delivering that ambition. Bow Street station will improve links to employment, business, education and leisure facilities in Mid Wales.’

Transport for Wales CEO James Price said ‘this is the first station we’re building since we took over the Wales & Borders rail service, and we’ve committed to at least five further schemes, demonstrating our commitment to investing in connecting communities throughout Wales to the rail network.’