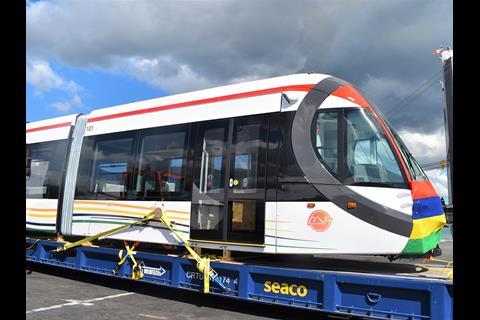 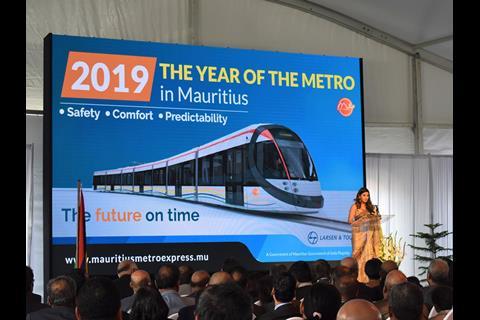 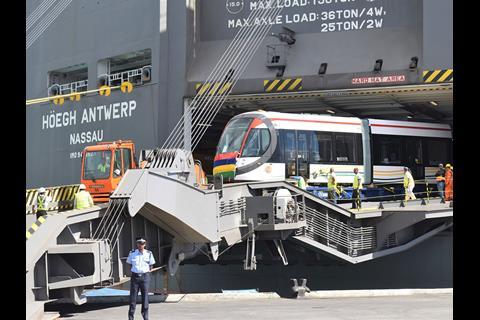 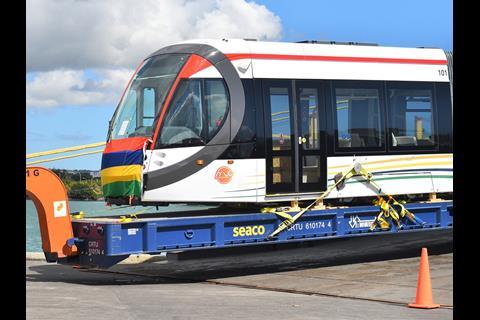 MAURITIUS: The first of 18 light rail vehicles which CAF is supplying for the Metro Express project was delivered on July 4, with five more expected to follow by the end of the year.

The initial 13 km Port Louis – Rose Hill section of the Metro Express line is expected to open in late September, when free travel will be offered for an initial period. The second phase is scheduled to be completed in 2021, with the full route then running for 26 km from Immigration Square in Port Louis to Curepipe with an end-to-end journey time of 40 min. The 17 ground level and two elevated stops will include four bus interchanges.

The route largely follows the alignment of the former Mauritius Government Railways’ Midland Line, which was abandoned in 1964. Longer-term plans envisage an 11 km extension.

Speaking at a ceremony to mark the arrival of the first LRV, Minister of Public Infrastructure & Land Transport Nandcoomar Bodha said the Metro Express was one of the most important infrastructure projects ever implemented in Mauritius, which would ‘provide a cleaner and more reliable mode of mass transit transport as well as enhance the standard of living of the population’.

In July 2017 the government awarded Indian contractor Larsen & Toubro an Rs18·8bn turnkey contract covering construction of the line and procurement of the rolling stock. In December the same year, L&T Construction awarded CAF a €100m contract to supply 18 Urbos LRVs as well as depot equipment, vehicle location technology, a driver training simulator and signalling systems which will give priority to LRVs at road junctions.

The seven-section bidirectional 100% low-floor LRVs are 45·41 m long, 2 650 mm wide and 3 250 mm high with five doors. They will typically operate at 20 to 25 km/h, with a maximum speed of 50 km/h. Operations will be managed from the control centre at Richelieu, where initial testing of the vehicles will also take place.

Welcoming the arrival of the first LRV, Prime Minister Pravind Kumar Jugnauth thanked the government of India for its support for the project, which includes a substantial contribution to the financing. He added that the Metro Express would be a ‘harbinger of the new way of socio-economic transformation along with other major infrastructure projects that will upgrade the country to a high income economy’.