London Underground's PPP contractor Metronet reports good progress with its programme to upgrade the 2·4 km Waterloo & City Line, which has been closed to traffic since April 1. Track relaying and signalling enhancements will cut journey times and increase capacity between Waterloo and Bank 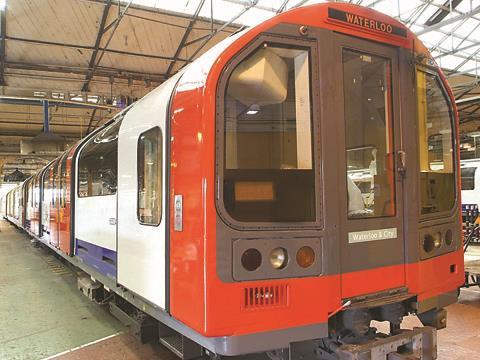 TO UNDERTAKE the £40m upgrade of the Waterloo & City Line, which first carried passengers as long ago as August 8 1898, Metronet's main contractor Balfour Beatty Rail has been continuously deploying staff 24 h a day in three shifts seven days a week, with 240 staff on site in a 24 h period.

'With Balfour Beatty Rail we are working around the clock, 24/7, for five months to deliver a greatly enhanced line for London Underground and its passengers', said Stephen Hall, Metronet's Chief Programmes Officer. 'Work is going well and we are on programme to hand back in time for London Underground to resume services on September 1'.

The upgrade of the Waterloo & City Line was originally intended to be completed by March 2007, with work undertaken during 87 weekend closures and others ranging in length from four to 30 days. According to Metronet's Programme Manager Jack Carter, this would have been 'a horribly inefficient way of doing it'. As well as accelerating the programme LU has made a saving of £3m on the project cost by agreeing to a five-month continuous closure. Weekend working also had the risk of over-running and causing unplanned disruption to Monday morning services.

As a result of the line being closed, the Waterloo & City train fleet can be removed for refurbishment, depot equipment at Waterloo is being upgraded and station enhancements are being undertaken. All these works are supplemental to the track and signalling upgrades specified by the PPP contract.

Track relaying is being undertaken to restore the linespeed to 55 km/h on straight sections and improve 'journey time capability' from 11·12 min to 9·81 min. As a metric of train service performance under the PPP, LU says the principal measure of capability for any line is 'a calculation of the average journey time for passengers using that line, including waiting time, measured under controlled conditions'.

Maintenance-intensive bullhead rail on longitudinal timber sleepers is being replaced by 9076m of flat-bottomed 113A Grade A rail on concrete sleepers, while 1432m of check rail is to be installed on the tightly-curved route. The provision of a new drainage channel under the sleepers should reduce signal failures caused by water ingress. The project's first 'critical path', the removal of the old track from both running tunnels, was completed to schedule on June 4, and tracklaying in the eastbound tunnel was completed on June 19. Work in the westbound tunnel was on schedule to be finished by the end of July.

With track removal requiring the operation of three work trains at a time, Clayton Equipment Ltd supplied four 15 tonne battery-electric locos for the project, featuring IGBT traction control (RG 4.06 p230). Two types of wagon were acquired for work in the small-profile tunnels, one equipped with a beam for handling bagged materials. Concreting in the sleepers has required 700 m3 of ready-mixed concrete delivered to site in 3 m3 loads. Rail sections have been handled by specially-adapted Bance trolleys. As well the running rails, the positive conductor rail is being replaced, using Type No 6 from Brecknell Willis which is manufactured from aluminium with a steel cap.

Balfour Beatty Rail is also undertaking signalling modifications to reduce the headway between trains, increase the maximum speed at which the crossover between the two running lines at Bank can be negotiated and reduce turnaround time at Waterloo. Equipment rooms at Bank and Waterloo are being rewired and signalling relays are being renewed unless they are no longer in production, in which case they are being refurbished.

Bombardier Transportation is supplying an EBI Screen control room system that should allow up to five trains to operate at the same time compared with the current four. It is due to be commissioned in early 2007 following completion of Phase 2 of the project.

The contract to refurbish the Waterloo & City Line's fleet of five four-car trains built to LU's 1992 stock design was awarded to Wabtec of Doncaster. This work has involved the installation of in-car CCTV and the application of anti-graffiti film to windows, as well as an internal and exterior repaint. Roads around Waterloo will be closed over two consecutive weekends in August to allow the cars to be lowered back into the depot and for the works locomotives to be lifted out. As when the cars were removed and the locos delivered in April, an extra weekend has been booked in case high winds prevent the lifting operations, undertaken using road cranes.

Once the current engineer's railway possession comes to an end in mid-August, LU will have two weeks for testing and driver familiarisation with the remodelled facilities before the route re-opens for revenue service at the beginning of September.