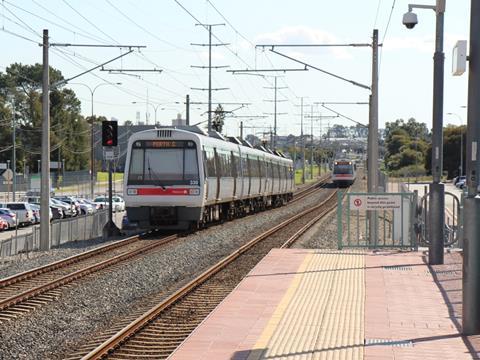 AUSTRALIA: The Western Australian government has allocated A$1·4bn for rail investment as part of its 2017-18 budget announced on September 8.

The bulk of the money is destined for the Metronet programme to expand and upgrade the Perth suburban rail network, over the next four years. This includes federal funding reallocated following the cancellation of the Perth Freight Link toll road project, while state Treasurer Ben Wyatt said A$105m would be raised through additional land sales and ‘a new value-capture method’.

The budget provides A$406·5m for work on the Forrestfield-Airport Link, which is now under construction and expected to open by the end of 2020. Another $423m has been allocated for the Thornlie – Cockburn cross-suburbs connection, which is currently budgeted at A$536m, and A$440·8m towards the A$520m northern extension of the Joondalup line to Yanchep.

The government is providing A$70m for level crossing removal projects, with the priority being the Denny Avenue crossing in Kelmscott. The budget includes A$28·2m for relocation of the station at Midland, paving the way for a future extension to Bellevue, while A$22·1m has been allowed to support planning of the future Byford extension and the Morley – Ellenbrook line.

Another A$101·3m has been committed for station upgrading and the construction of new stations such as Karnup on the Mandurah line. Mandurah station is to gain a multi-storey car park at a cost of A$16·1m.

Funding for regional passenger services is also included in the state budget, with A$32m allocated under the Rail Future Fund to revitalise TransWA’s Australind route between Perth and Bunbury in the southwest. A new build of DMU cars is to be ordered for the twice-daily service, replacing the existing stock which dates from 1987. The order is likely to be piggybacked onto a contract for 102 suburban EMU cars to be acquired as part of the Metronet programme, which Transport Minister Rita Saffioti said would ‘create efficiencies from a production and delivery timeframe point of view’. The package includes funding for accessibility improvements and station modernisation at Yarloop, Cookernup and North Dandalup, in conjunction with network manager Arc Infrastructure.