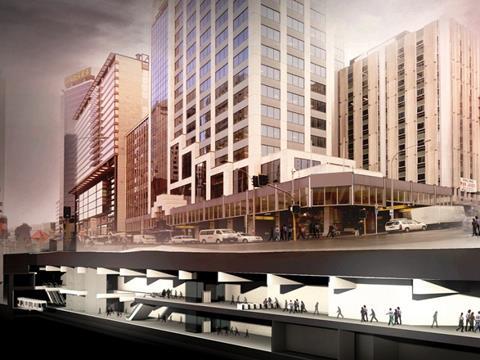 NEW ZEALAND: Preliminary work for the City Rail Link in Auckland started on December 21 with a ceremony on the corner of Victoria Street and Albert Street.

The 3·4 km route would run mostly through twin tunnels up to 42 m below the surface to connect the current Britomart terminus with the Western Line at Mt Eden. This would increase capacity, reduce headways and cut journey times by eliminating the need for trains to reverse at Britomart.

Two new underground stations would be built at Aotea (11 m deep) and Karangahape Road (33 m deep), and Mt Eden station is to be rebuilt. The sections along Albert Street and at Eden Terrace would be cut-and-cover, with the remainder bored with a 7·5 m diameter tunnel boring machine.

Auckland Council approved the project in May 2012. Tunnelling is due to begin in mid-2016, with the project expected to be completed in five and a half years.

Auckland Council expects the national government to contribute 50% of the NZ$2·5bn project cost.