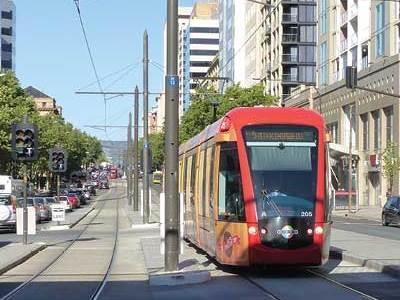 AUSTRALIA: South Australia Premier Jay Weatherill has begun public consultation on an integrated transport & land use plan for the Adelaide region. It has been developed by the South Australia government together with industry groups and government agencies. Total cost of the 30-year package is put at A$36bn, with an estimated A$29bn coming from the state and/or central government.

The plan envisages a massively expanded tram network, called AdeLINK. The first stage would see the Outer Harbor rail line converted to light rail standards. Together with new routes to Semaphore and West Lakes, this will form the PortLINK route. A CityLINK loop around the city centre is also planned in the short to medium term.

In the medium term, the EastLINK route would be built to serve Norwood and Magill Campus, along with WestLINK to Henley Square and a branch to Adelaide Airport. This route would incorporate the existing Glenelg tram line. Further schemes include UnleyLINK to Mitcham in the south and ProspectLINK to O’Connell Street in the north. The new tram routes would replace existing bus routes, with the busiest services expected to carry 25 000 passengers a day by 2036.

The suburban heavy rail lines are to be upgraded, with the Seaford, Gawler and Tonsley lines being electrified to create a ‘north–south backbone’. Corridors would be preserved for future rail links, including a line to Aldinga in the south. Safety improvements across the network would include grade-separation of level crossings.

From early 2014 new Bombardier A-City Class 4000 electric multiple-units will start to enter service; the first of the 22 three-car trainsets arrived in July.

Longer-term plans include electrification of the Belair line, relocation of the standard-gauge interstate station at Keswick to Adelaide station, and the possible construction of an underground loop through the city centre with four new stations.

Other developments include a new station at Wayville, station upgrades, increasing park-and-ride spaces, remodelling the bus network, and laying down cycle routes. The plan also envisages the expansion of rail freight capacity, including a freight bypass in northern Adelaide and the grade separation of Goodwood junction.