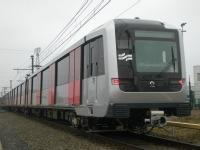 Testing is well underway at Alstom’s Valenciennes plant in northern France with the first trainset scheduled to be in service by autumn 2012.

A €200m contract signed in February 2010 will supply 23 trainsets and includes an option for additional cars for the north-south line currently under construction. The initial build is intended to replace the M1-3 cars on routes 53 and 54, providing almost twice as much capacity as the older vehicles.

The 116 m six-car H5 trainset has capacity for 1 360 passengers. According to Alstom, the Metropolis offers an ‘optimal travelling experience’, with high ceilings and large windows as well as LED lighting.