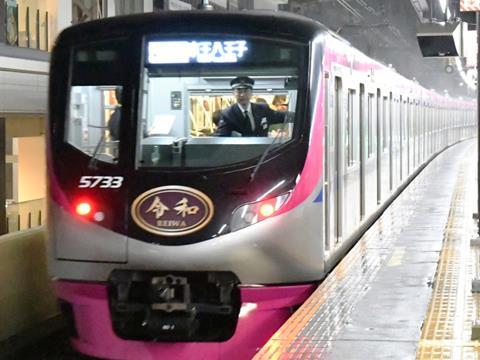 JAPAN: Among the special events to mark the abdication of Emperor Akihito and the accession of Emperor Naruhito, the Keio Electric Railway running west from the capital operated a commemorative limited express service over the transition from April 30 to May 1.

Departing from Tokyo’s Shinjuku station at 23.45, in the closing moments of the Hesei Era, the train carried special ‘Rekazu’ headboards front and back to signal that it was travelling into the new Reiwa Era. Arrival at Keio-Hachiouji was scheduled for 00.24.

The special was operated by one of the railway’s latest Series 5000 EMUs. The five 10-car units were built by J-TREC in 2017 at a cost of approximately ¥10bn to operate the railway’s Keio Liner limited express services from February 2018, and can carry 438 seated passengers. They have rotating seats which can be arranged longitudinally to maximise standing room at peak times and transversely at other times.

Tickets for the special train had been on sale for the previous week, along with compulsory reservations at ¥400 per seat. Passengers were also presented with a Keio Electric Railway Original Trading Card. In addition, the railway made available 3 000 commemorative one-day tickets for sale on May 1, offering unlimited travel on the national holiday to mark the start of the Reiwa Era or any other date up to July 31.