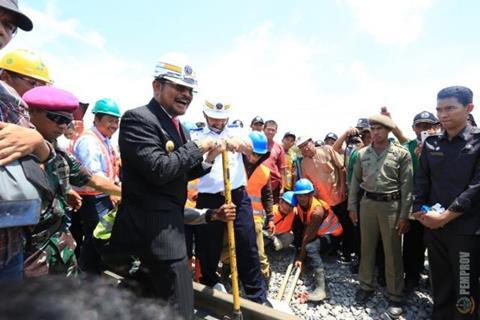 INDONESIA: The first track has been laid on the island of Sulawesi to mark the start of railway fit-out on the 145 km standard gauge route being built from provincial capital Makassar to the port of Pare Pare.

The start of tracklaying at Lalabata in Barru regency on November 13 was celebrated with a ceremony attended by South Sulawesi Governor Syahrul Yasin Limpo and Hermanto Dwiatmoko, Director-General for Railways at the Transport Ministry. Initially just 25 m of track is in place, but Dwiatmoko suggested that around 16 km could be completed by the end of this year.

Sulawesi has no railways at present, but it possesses considerable mineral reserves. It is envisaged that the railway would be used by both passengers and freight, providing a ‘modern rail service’ from 2019, according to Dwiatmoko.

The line will serve the regencies of Makassar, Maros, Pangkajene, Barru and Pare Pare, with 25 stations. A 30 km section of the line has been funded by South Sulawesi province, with the rest being paid for by the national government. The overall budget is 970bn rupiah, including 200bn rupiah for land acquisition, which is still ongoing, and allocations for importing track and components from Japan.

Yasin Limpo told guests that the development of local staff and skills would be essential to the commissioning and operation of the railway, adding that 100 young people from the island had already been selected to attend national railway PT KAI’s training academy in Madiun.

The government’s plans envisage that the Makassar – Pare Pare line would be the first of a larger trans-Sulawesi network.