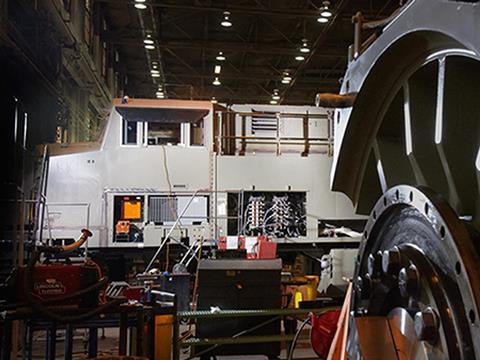 RUSSIA: A strategic business plan for the formation of a diesel engine manufacturing joint venture at Penza in Russia was signed by GE and Transmashholding on February 1. GE said the project would address the locomotive needs of Russian Railways, and also supply engines for maritime and distributed power applications.

Subject to final regulatory approval, the equally-owned GE-TMH joint venture would invest more than US$70m in equipment and training to establish a plant which would produce GEVO diesel engines of between 2 900 kW and 4 700 kW. Initial production of up to 250 engines per year is envisaged, with the potential to increase capacity and expand the product portfolio according to market demand. Identifying export opportunities would be a ‘priority goal’, according to GE.

‘Transmashholding has high expectations for the future of this joint project with GE to develop and produce state-of-the-art diesel engines’, said TMH President Andrei Bokarev. ‘It will significantly expand our expertise and the range of products we offer to the market. In combination with our existing solutions, we will be able to offer engines to our customers that precisely meet their needs. It’s particularly noteworthy that the new venture will produce engines not only for the Russian market, but also for export.’

The agreement was signed at the 17th GE Oil & Gas Annual Meeting in Firenze, and forms part of a wider US$1bn Russian transport, power and oil and gas sourcing programme which was announced by GE and partners including TMH and oil company Rosneft.