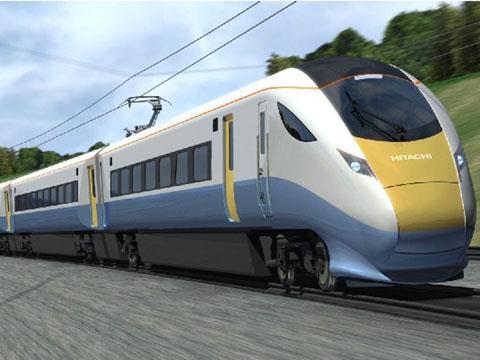 UK: Hitachi Rail Europe announced on May 14 that it had signed a contract with preferred bidder Merchant Place Developments covering the construction and fit-out of a rolling stock manufacturing plant at Newton Aycliffe in County Durham.

Hitachi said that construction of its ‘first train factory in Europe’ represented an investment of £82m to create a ‘state of the art manufacturing hub’ in northeast England. Hitachi Rail Europe has been awarded a £4m grant by the UK’s Department for Business, Innovation & Skills towards the project, which has also been supported by the local authorities and Business Durham.

The deal will enable Merchant Place Developments to award further contracts for construction of the plant. An archaeological exploration is currently underway at the site, but construction is expected to start at the end of 2013, with the factory scheduled to go into production in 2016. As well as 200 jobs to be created during the construction phase, Hitachi said the factory would ‘create long-term employment for 730 people’, including a research and development facility

The plant will initially be used to assemble the Super Express Trains for the Great Western and East Coast main lines, being procured by the Department for Transport under the Intercity Express Programme; the first GWML trains are due to be delivered in 2017. Hitachi Rail Europe hopes to win other rolling stock orders, such as for Crossrail, where the company has been shortlisted.

Executive Chairman & CEO Alistair Dormer said ‘we are creating employment opportunities for a large number of engineers and technicians in the North East of England, which has a strong tradition of engineering skills. We are keen to fill our order books, building trains here in the UK for use in Britain and for exporting to continental Europe.’

Having acquired the Amazon Park site five years ago, Merchant Place Developments has ‘taken the design of the plant to a detailed stage’, according to Director Geoff Hunton. The group is now in discussions with suppliers and contractors ‘so that we are ready to move ahead with the development programme’.