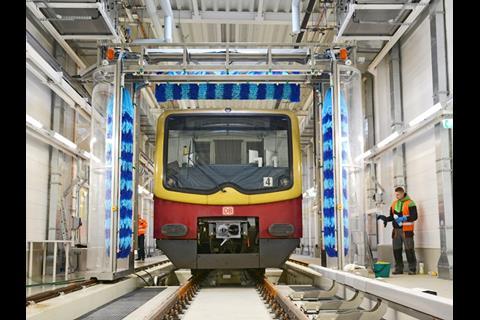 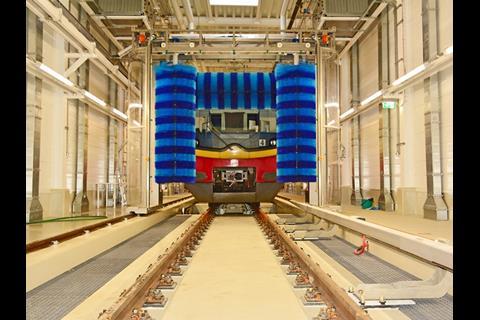 GERMANY: The longest train washing plant on the Berlin S-Bahn has commenced operations in Friedrichsfelde depot. The 160 m long wash road can wash an eight-car trainset in 30 min, around half the time taken by older washing plants.

The plant took 12 months to install, with the €5·5m cost financed by DB subsidiary S-Bahn Berlin. It is the first project in the German market for Polish company Agat.

It is envisaged that the machine will perform around 5 000 washes per year, with each of the nearly 200 four-car electric multiple-units in operation on the Stadtbahn service group of lines S3, S5, S75 and S9 being washed every 14 days. These trains were previously washed at the Wannsee depot.

A total of 3 200 litres of water is require to wash an eight-car trainset, and the system reuses 80% of water from previous washes. Two washing portals automatically detect the front and back of a train, and only one person is required to operate the equipment.

‘The cleanliness of trains is a hot topic for our passengers’, said S-Bahn Berlin CEO Peter Buchner. ‘Visible cleanliness is a sign of quality and contributes to an increased feeling of security’.

The plant is also equipped with hot air nozzles collectively rated at 780 KWh to de-ice trains at up to -40°C in the winter months. It takes 60 min to de-ice one train before it is ready to enter service.

S-Bahn Berlin plans to build a second washing plant at Grünau depot in 2019, which will be used to wash the new trains being supplied by Siemens and Stadler.