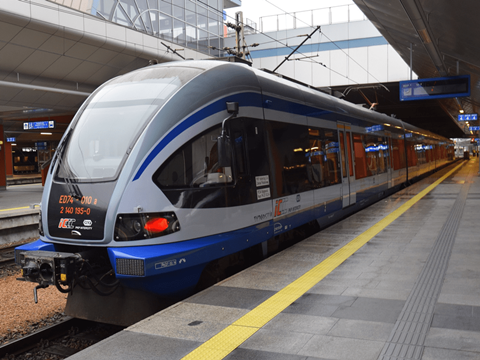 POLAND: PKP Intercity has signed a 274·8m złoty contract with a consortium of Pesa and its subsidiary ZNTK Mińsk Mazowiecki for the modernisation of 14 ED74 electric multiple-units.

The modernisation will include the fitting of air-conditioning, wi-fi, mobile phone signal repeaters, a power socket at every seat and two vending machines selling snacks and drinks. The Pesa EMUs will also be made accessible, and will have spaces for bicycles and better sound-proofing.

Work on the first two units is scheduled to take two years, after which PKP Intercity will test them for seven days without passengers followed by 90 days of passenger-carrying tests. The modernised trains will be used mainly on the Wrocław – Lublin and Wrocław – Kielce routes.