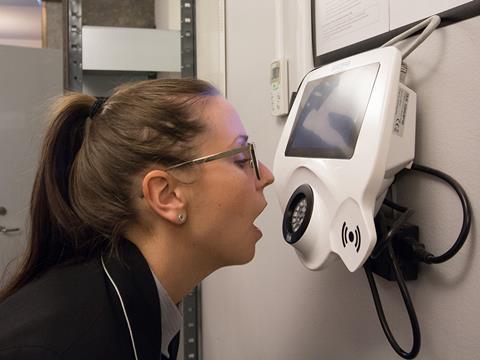 ‘With just 33 unmanned units covering the entire country, all SJ’s train drivers confirm they are sober every time they come to work’, said Mark Hawthorne, Vice-President Sales & Marketing at Hök Instrument. ‘While daily alcohol screening has been used in many industries, I believe this is the world’s first nationwide, networked alcohol clock-in system.’

Staff identify themselves using their ID card, then breathe gently towards the sensor inlet of the machine, which they do not need to come into contact with. A new user can be tested every 10 sec, with a detailed report sent to management systems if alcohol is detected.

‘The best thing about Sesame Connect is that it does not need a mouthpiece, which makes it quick, easy and hygienic to use', said Linda Dempe, Safety Officer at SJ Götalandståg where the system was trialled last year. ‘Many staff were worried about the new system before it was introduced, but now there are no complaints.'

Kevin Harris, Head of Train Drivers at SJ Götalandståg, said the ability to undertake 100% daily screening was ‘very positive’ for management and safety-critical staff. ‘In the past, random alcohol tests were sometimes a source of tension and debate, but the new routine has removed the earlier difficulties’, he said.