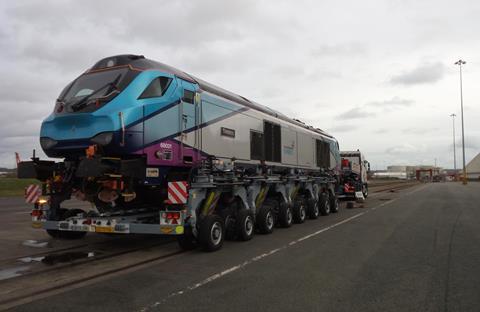 TransPennine Express announced on November 28 that it had shipped a Class 68 locomotive to Spain from Royal Portbury Dock. The locomotive, which is being subleased from Direct Rail Services, will be used to haul the first Mk Va coaches being supplied for TPE by CAF from its facilities in northern Spain. TPE and CAF are reportedly considering testing the push-pull trainsets on 1 435 mm gauge sections of the Spanish high speed network.

Electrification contractor Keltbray Aspire has opened a new facility in Rugby, providing office space for 20 people and a workshop to maintain a fleet of 40 road-rail vehicles. ‘This facility is a great improvement and positions us well for continued growth in the rail electrification arena’, said Keltbray Group CEO Brendan Kerr.

Work has begun on a £1m refurbishment programme at Bridgend station, due for completion in spring 2018. Funded through DfT’s National Stations Improvement Programme, the project includes an improved concourse and ticket office, refurbished toilets and improved security with new CCTV.

Network Rail announced on November 24 the completion of new footbridge at Sellafield station, built at a cost of £995 000. Work had started on August 21 to replace the existing footbridge which had been suffering from high levels of corrosion due to its coastal location.

On November 24 Govia Thameslink Railway launched the third phase of public consultation into its timetable revisions planned for May 2018. The changes will enable the operator to exploit additional capacity made available through completion of more elements of the Thameslink Programme, which will enable a progressively greater number of through services to link destinations north and south of London until 24 trains/h are operating across the city from December 2019.