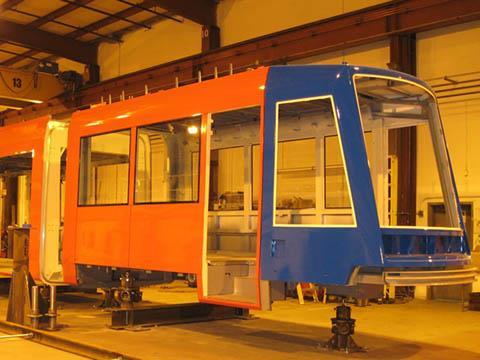 USA: The Department of Transportation has awarded a total of $75m to the Portland Streetcar Loop. This includes $30m from the FTA 's Small Starts programme, and $45m earmarked in the 2009 Omnibus Appropriations bill signed by President Obama in March. Another $72m will come from local and state lottery sources.

Part of the funding will be used to purchase seven trams from United Streetcar, a subsidiary of Oregon Iron Works which will design and build the vehicles locally in partnership with Skoda Transportation of the Czech Republic.

Stacy & Witbeck has already been selected as general contractor for the 5·3 km extension, which will run from the existing line at 10th Street and Lovejoy in the Pearl District, cross the Willamette River, then run south to the Oregon Museum of Science & Industry. A separate future project would complete a loop to the existing line via a new bridge at the southern end.

Initial works are already underway, and heavy construction should begin this summer for completion in 2011. The line is expected to carry approximately 8 700 passengers a day.