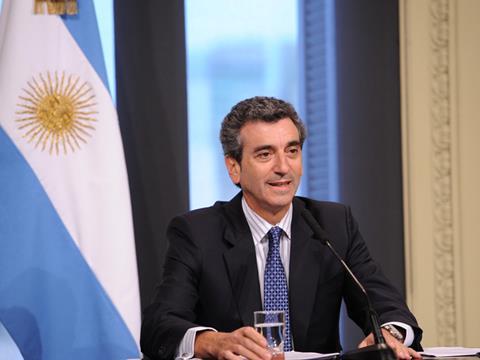 ARGENTINA: Minister of the Interior & Transport Florencio Randazzo announced on June 4 that the government was revoking the two freight operating concessions held by América Latina Logística SA of Brazil. Comprising the former San Martín and General Urquiza networks, at 8 000 route-km ALL Argentina has operated the country’s most extensive freight network and the second-largest in terms of traffic, carrying 5 million tonnes a year.

‘Both concessions, which were awarded in 1999, are being revoked for serious breaches of contract’, said Randazzo. The decision to renationalise the two companies had been taken by President Cristina Fernández in line with the government’s policy of reducing transport costs to make Argentina more competitive, he added.

According to Randazzo, the government’s decision had also been based on the findings of reports produced by national audit office AGN and transport regulator CNRT. These had revealed breaches of the concession agreements including failure to undertake committed investment programmes and unauthorised route closures.

In statement issued to the market on June 4, ALL said that it had ‘not yet received any official information from the Argentine government on the termination of its concession agreements in the country’. The company added that it would ‘take all legal measures necessary as soon as it receives an official communication’.

ALL noted that ‘in view of the current political and economic scenario’ in the country, it had already being seeking investors who would be willing to take a stake in ALL Argentina. ‘Demanding an enormous focus by management’, ALL Argentina currently represents ‘only a minor share’ of ALL’s total activity, contributing 6⋅5% of net revenue and 0% of EBITDA in 2012.

With a total of 158 locomotives and 7 380 wagons, the 1 676 mm gauge San Martín and 1 435 mm Urquiza networks are now to be operated by Belgrano Cargas y Logística SA. This new state-owned body was formed earlier this month following the renationalisation of the 1 000 mm gauge Belgrano network on May 22.

Randazzo also announced that the concession for the Tren de la Costa light rail route connecting Maipú and Delta in the northern suburbs of Buenos Aires had been revoked. This was due to a lack of maintenance, transfer of the contract and a failure to make contractual payments to the state since 2001.

‘The interests of the state must be defended’, said Randazzo. ‘The concessions awarded in the 1990s have not met any of their objectives’.