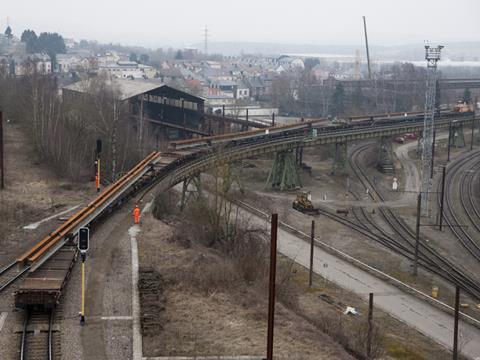 EUROPE: CFL Cargo transported 14 concrete and rolled steel bridge beams each 60·6 m long from ArcelorMittal's Differdange plant in Luxembourg to Dresden-Friedrichstadt in Germany between March 11 and 12.

CFL Cargo had not previously moved beams of such length by rail, and so a detailed transport plan had to be developed. The train was limited to 100 km/h and the route had to avoid tight curves.

The 14 beams with a total weight of 380 tonnes were bolted together into seven pairs for transport on 21 wagons. Along with the locomotive, this took the train weight to 790 tonnes.

The beams were secured on groups of three wagons, secured to the outer type Rbs wagons using custom-made pivoting and sliding crosspieces to ensure the beams remained straight while the wagons underneath moved on the curves. The Rbs wagons were separated by Rnss wagons.

A second delivery is scheduled for 2014.