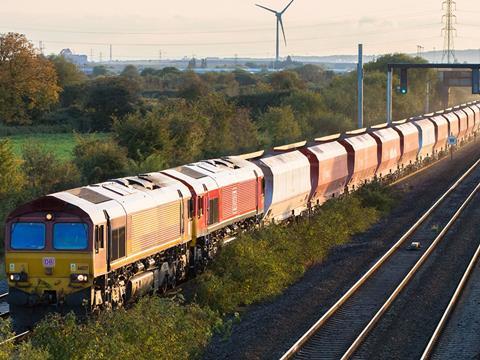 ‘Usually only 21 wagons are used but using 60% more wagon capacity makes it more efficient and definitely more environmentally friendly’, said Cemex UK Rail & Sea Manager Mark Grimshaw Smith. ‘We hope that we can use this type of jumbo train on other parts of the rail network where we have railheads in quarries and materials are coming into conurbations such as London where the roads are most congested.’

‘Over the next few weeks we plan to operate even heavier trains on this route’, said David Fletcher, Head of Major Projects at DB Cargo UK. ‘This will allow us to collect all the necessary performance data so we can work with Network Rail to identify suitable paths for a regular service.’

Fletcher said the train required two locomotives because of the gradients in the Severn Tunnel, but ‘the use of one path to move a longer train also releases capacity for other freight services on a busy network.’