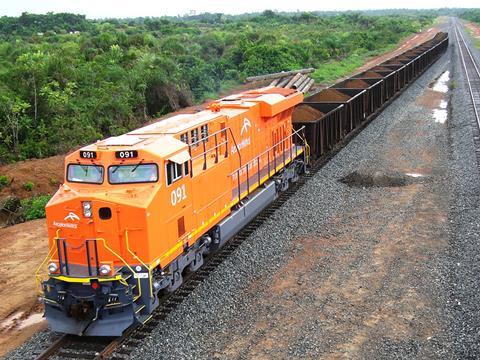 LIBERIA: A memorandum of understanding which could see iron ore from a proposed mine at Zogota in Guinea exported by rail through Liberia has been signed by mining project developer Niron Metals plc and the Liberian government.

Various proposals have been put forward over the years for the exploitation of the Zogota and other iron ore deposits in southeast Guinea. Some envisaged the construction of a lengthy new railway running west entirely within Guinea, but the government of Guinea has since authorised the export of ore south through Liberia, which offers a shorter route to the coast. Ore could be delivered to the existing Liberian railhead by road, or a cross-border rail extension could be built.

The Liberian government will now hold talks with ArcelorMittal, which holds the concession to operate the existing 1 435 mm gauge railway and associated port facilities at Buchanan. This would be followed by three-way discussions between the government, ArcelorMittal and Niron to discuss access rights for the railway and port.

ArcelorMittal’s concession has provision for third-party access to the infrastructure, subject to capacity being available or the third parties funding works to add capacity so that the incumbent’s operations are not affected.

The signing of the MoU with the government is ‘an important milestone in our plans to develop the Zogota project’, said Niron Chairman Sir Mick Davis. ‘We intend to complete our feasibility study within six months and continue to work with relevant stakeholders to bring Zogota rapidly into production for the benefit of all.’

Molewuleh Gray, Chairman of the Liberian National Investment Commission, said the MoU ‘opens a new chapter and supports the development of a world-class mining and logistics project’ which would benefit the Mano River Union group of West African countries.