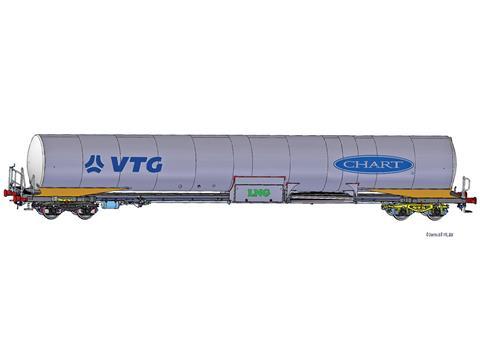 EUROPE: Leasing company VTG and cryogenic liquid storage and transport specialist Chart Ferox are jointly developing two prototype wagons suitable for carrying liquefied natural gas by rail. It is envisaged that two wagons could replace four lorries or five tank containers on the roads, with insulation to permit storage times of up to six weeks.

‘We are very excited by the fact that we are creating an entirely new transport option for LNG, and one that reinforces Chart’s small scale LNG product portfolio’, said Miroslav Cerny, Director of Business Development at Chart Ferox.

The wagons are to be assembled in Germany by VTG’s Waggonbau Graaff business, using cryogenic parts, vessels and cabinets supplied from Chart Ferox’s facility at Decin in the Czech Republic. A custom-developed suspension system will link the frames and the cryogenic vessel, and there will be GPS monitoring of the pressurised container.

The wagons will be designed for changing gauge at the border between France and Spain.