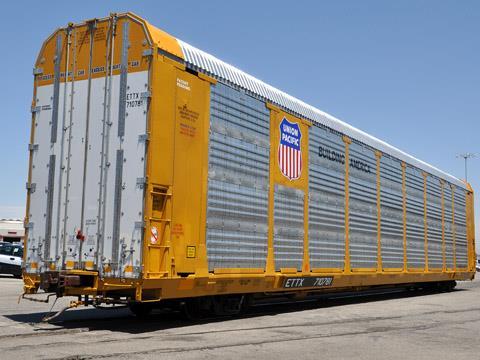 Union Pacific Corp has reported Q2 2016 net income of nearly $1·0bn, compared to $1·2bn for Q2 2015. Operating revenue was down 12% on the same period last year at $4·8bn and operating income down 15% at $1·7bn. ‘While the second quarter was again challenging from a volume perspective, we continued focusing on initiatives that are squarely in our control, such as being productive with our resources, providing our customers with excellent service, and improving our safety performance’, said Chairman, President & CEO Lance Fritz. ‘We see potential bright spots in certain segments of our business if key economic drivers continue to strengthen as they have in recent weeks.’

Logistics company ALB has awarded Takargo of Portugal a three-year contract that is expected to see it operate between seven and 11 intermodal services a week between Lisboa, Leixões, Sines, Setúbal and Badajoz in Spain. Under the contract, Takargo is to dedicate a Vossloh Euro 4000 to the flow, as well as 60 ft and 90 ft container wagons.

An initial 30 of 780 coal hopper wagons which Pakistan Railways has ordered from CRRC Jinan have been delivered by sea, along with parts for the next 250 wagons which are to be assembled at PR’s Mughalpura workshop. The contract also includes 20 brake vans.