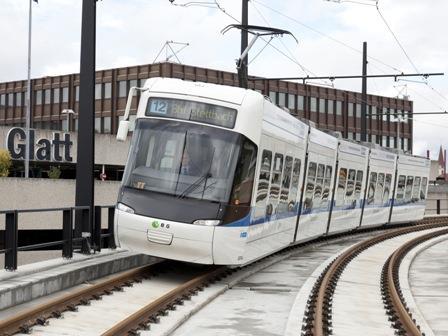 SWITZERLAND: Project promoter Zürcher Verkehrsverbund and concessionaire Verkehrsbetriebe Glattal organised a day of festivities to celebrate the opening of the final Auzelg — Stettbach section of the Glattalbahn light rail project north of Zürich on December 11.

The completed route runs from Stettbach to Zürich Airport via Wallisellen, Auzelg and Glattpark and is operated by VBZ as Line 12.

On December 11, following official inauguration ceremonies attended by local dignitaries, the line was opened to the public. A fleet of 13 vehicles ran at 5 min intervals between 11.00 and 18.30, carrying more than 70 000 visitors who came to try out the new airport connection and enjoy the entertainment provided at several stations as part of the Glattfest celebrations. Commercial service began on December 12.

Work on the 12·7 km network started in September 2004 and was divided into three stages. The first 3 km between Messe/Hallenstadion and Auzelg with five stops entered service in December 2006, as an extension of Route 11, followed by Phase II from Glattpark to Zürich airport in December 2009 operating as an extension of Line 10. Completion of the final section enables Line 12 passengers to transfer to S-Bahn services at Wallisellen and Stettbach.

Line 12 operates daily between 05.00 and midnight at 15 min intervals; journey time is 26 min and capacity is 960 passengers/h per direction. The route is worked by Bombardier Cobra low-floor trams.