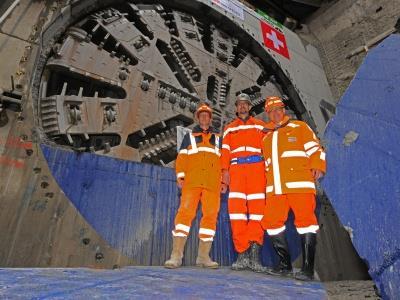 SWITZERLAND: Swiss Federal Railways held celebrations in Zürich on November 22 to mark the breakthrough of the Weinberg tunnel, which forms the centrepiece of the Durchmesserlinie cross-city rail link project.

The tunnel boring machine finally reached its destination below the city’s Hauptbahnhof following a 4·5 km drive under the Limmat river from a launching cavern at Oerlikon.

VIPs from the political and business community joined SBB management and the construction teams for the event, which saw SBB Chief Executive Andreas Meyer give the signal for the last few millimetres to be excavated. After the machine broke through, the first miner emerged carrying a statue of St Barbara – the patron saint of tunnellers.

Joining Meyer and DML project director Roland Kobel for the celebrations at Oerlikon were the Director of the federal transport office Peter Füglistaler, the leader of canton Zürich Ernst Stocker and the city’s Mayor Ruth Genner.

Due to be completed in 2014-15, the Durchmesserlinie will form an integral part of SBB’s east-west inter-city axis, avoiding the need for through trains to and from northeast Switzerland to reverse at Zürich HB. As well as increasing the capacity station area, it will enable a comprehensive restructuring of both the long-distance and S-Bahn service patterns.