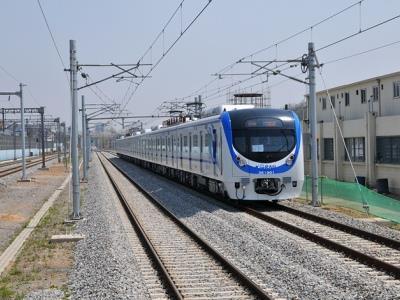 SOUTH KOREA: KR’s Gyeongchun Line to the east of Seoul was reopened on December 21 following the completion of a 2·7 trillion won project to replace the former single-track regional diesel route by a new double-track elevated and electrified alignment.

The reconstruction of the 81·3 km route from Mangu station in the Sangbong-dong district of Seoul to Geunhwa-dong in Chuncheon has allowed Korail to cut the fastest journey time from 1 h 45 min to 63 min by express train or 79 min for stopping services. Normal service interval is 20 min, increasing to every 12 min during peak hours.

The reconstruction project took 11 years. Work began in December 1999 and was originally due for completion in 2004, but the project was delayed for several reasons, including lack of funding. Upgrading of the Gyeongchun line is intended to improve access to Gangwon province, a popular tourist destination, and the line will feature in transport plans to support PyeongChang’s bid to host the 2018 Winter Olympic Games

To operate the line, Korail has taken delivery of a fleet of 15 eight-car EMUs designated Class 361; built by Hyundai Rotem, these have a maximum speed of 110 km/h. From the end of this year Korail expects to introduce double-deck express EMUs able to operate at up to 180 km/h, which should reduce the journey time to around 40 min.

At present all trains terminate at Mangu, where passengers must change to the Jungang Line to reach central Seoul. When the 180 km/h EMUs enter service, these will run through over the Jungang line from Mangu to Yongsan station in the city centre. In September Thales was awarded a contract to supply ETCS Level 1 which will support the increase in train speeds and allow headways to be reduced.