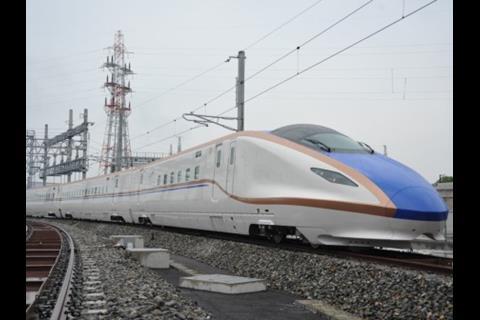 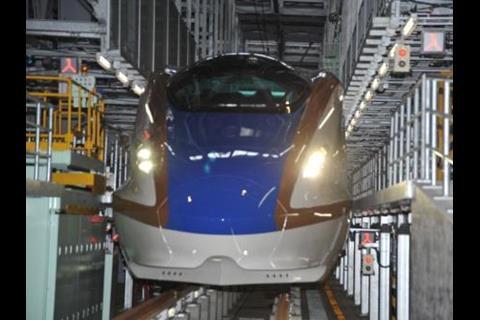 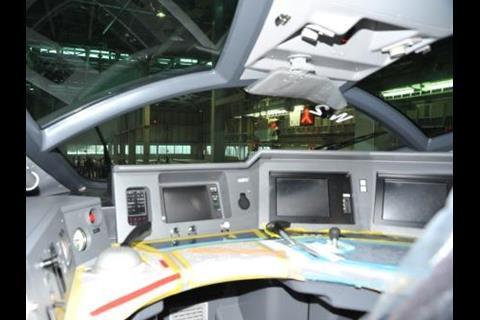 JAPAN: JR West is preparing to start testing the Series W7 trainsets it is acquiring for use on the Hokuriku Shinkansen which opens for revenue service in March 2015. Two trainsets are being commissioned at Hakusan depot, around 10 km west of Kanazawa, ready for the start of test running on the new line from August 1.

The 10 Series W7 sets are identical to the 17 Series E7 units being purchased by JR East, creating a combined fleet of 27 units. A development of the Series E2 design built in 1995-2002, the trains are being supplied by Kawasaki Heavy Industries, Hitachi, J-TREC, and Kinki Sharyo. Like the Series E2s, they are equipped to operate at both 25 kV 50 Hz and 25 kV 60 Hz, changing frequency three times in the course of a journey between Tokyo and Kanazawa.

Each 12-car trainset is formed of two driving trailers and 10 intermediate motor cars powered by AC motors using VVVF inverter controls. A total power rating of 12 MW will enable the trains to run at up to 275 km/h on the line’s 3% gradients, although the maximum speed in service is expected to remain at 260 km/h. The trains are fitted with low-noise pantographs and snow ploughs to cope with heavy snowfall in the region. The braking performance has been boosted by 10% to cope with the steep gradients and to ensure a safe emergency stop in the event of an earthquake.

The vehicles have aluminium alloy bodyshells to an aerodynamic profile. The single GranClass car in each set has full active suspension, with a semi-active suspension provided for the remaining 11. Each train will accommodate 18 GranClass passengers, 63 in Green Car and 835 in standard class. The exterior livery of ivory and sky blue, with a copper lining, represents a theme of Wa no Mirai (the future of harmony), combining traditional Japanese craftsmanship with the latest technology.

The two railways plan to operate three types of service on the Hokuriku Shinkansen. Kagayaki expresses will connect Tokyo and Kanazawa in 2 h 30 min, while intermediate stations will be served by the slower Hakutaka trains. JR West will also operate a Turuga shuttle service along the coastal section between Toyama and Kanazawa.