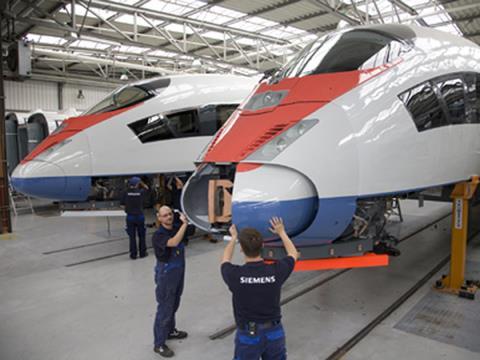 IN 2009 PASSENGERS on the flagship Moscow - St Petersburg route will be the first in Russia to ride the Velaro RUS. A broad-gauge version of Siemens' Velaro design, the stylish high speed train will bring unprecedented standards of speed and comfort to Russian tracks.

Russian Railways (OAO RZD) and Siemens AG signed a contract on May 18 2006 under which the German company will develop and deliver eight high speed trainsets. They will be deployed on the Moscow - St Petersburg and Moscow - Nizhniy Novgorod lines. The two companies are currently negotiating a related contract valued at around €300m under which Siemens will maintain the trains for 30 years.

High speed rail services began in Russia in 1984 over the 650 km route between Moscow and St Petersburg using Russia's own design of high speed train, the ER200. This was permitted to run at 200 km/h, introducing a 4 h 39 min timing between the two cities in 1986. Since then the line has been improved and the track upgraded, and on August 5 2006 journey times between the two cities were cut to just 3 h 55 min, with daily services at 200 km/h provided by three ER200 sets and one Nevsky Express working hauled by a ChS200 twin-unit locomotive.

With the benefit of 20 years of experience in operating its own high speed trains, in 2005 OAO RZD drafted a programme for development of its express and high speed services. This called for a gradual increase in line speed from 160 km/h to 250 km/h on eight principal inter-city corridors: Moscow - St Petersburg, St Petersburg - Buslovskaya, Moscow - Smolensk, Moscow - Nizhniy Novgorod, Moscow - Kursk, Rostov - Mineralnye Vody, Krasnodar - Mineralnye Vody and Omsk - Novosibirsk.

The programme also called for development of a new design of high speed trainset. Research determined that 60 trainsets would be needed with various power ratings and speed maxima: 3 kV DC and 3 kV DC/25 kV AC dual-voltage units with top speeds of 160 km/h and 250 km/h as well as a 25 kV AC version able to run at a maximum speed of 350 km/h.

The technical requirements for high speed trains laid down in 2005 by OAO RZD in partnership with Russian scientific research centres led by the All-Russian Railway Research Institute (VNIIZhT) determined many of the design features of the Velaro RUS. Of major significance were Russia's harsh winter conditions, the gauge of 1 520 mm, and the need for compatibility with existing infrastructure. The TSI interoperability specification that is common in European countries could only be applied to Russian railway routes with a number of major exemptions.

OAO RZD's market analysis of production high speed trains showed that the trainsets built by Siemens on the basis of its Velaro platform were the closest match for Russian conditions. Originally developed as the ICE3 for Deutsche Bahn, the Velaro was subsequently ordered as the AVE S103 for Spanish National Railways and the CRH3 for Chinese Railways. Thanks in part to Siemens' broad international experience, the Velaro platform proved to be flexible enough to be adapted to the Russian requirements, and the Velaro RUS was born.

Agreeing technical standards for the new train was quite a challenge. Experts on both sides addressed the issue, suggesting ways to adapt the Velaro equipment or modify the requirements so that Russian standards were still met. In some cases Russian experts proposed their own design changes which were then adopted by their Siemens counterparts.

In a first step, four trains to operate under 3 kV DC catenary will be built to run at a speed of 250 km/h on the Moscow - St Petersburg line. They will be followed by four dual-system trains for the Moscow - Nizhniy Novgorod route, but they are also intended, after minor modifications, to be able to run at 300 km/h on the dedicated high speed line being planned between Moscow and St Petersburg (p719).

To meet the capacity requirements for service on the Moscow - St Petersburg route, the new trains must each accommodate 600 seats. This meant increasing the number of cars per train from eight to 10 (Fig 1).

The 10-car trains are 250 m long. With a car body width of 3 265 mm, these trains are, like the CRH3 units for Chinese Railways, much wider than similar trains operating in Western Europe. Each set will seat 604 passengers, 104 of them in business class.

Project planning and production will be carried out in Erlangen and Krefeld in Germany. The production schedule calls for completion of the first train by the end of 2008, with the remaining units following at intervals of two months. The first trains to be delivered will undergo a programme of tests that will culminate in certification to operate on the OAO RZD infrastructure in compliance with Russian legislation. Four trains are due to enter scheduled passenger service at the end of 2009 on the Moscow - St Petersburg route, with the dual-system trains commencing to serve the Nizhniy Novgorod route in 2010.

Siemens will be responsible for carrying out preventive maintenance at the existing depots in St Petersburg, Moscow and Nizhniy Novgorod and for ensuring contractual availability of the trains. Employment of Siemens-trained OAO RZD personnel is also planned.

The specific Russian conditions meant that a number of changes to the basic Velaro design were necessary. For example, design modifications were needed in the bogie area because of the 1 520 mm gauge.

To meet the specifications for mechanical strength at temperatures down to -50°C, special steel grades and materials must be used. This applies to all exterior components and especially to fastening elements, rubber gaskets and seals, and also to plastic components.

The climatic conditions in Russia with sub-zero temperatures, ice and snow also demanded redesign of the underfloor area to avoid snow and ice building up. All underfloor components have to be fully sealed.

Roof equipment will also be modified. The pantograph will be equipped with pneumatic short-stroke cylinders that will enable the pan to break loose should it become frozen in the lowered position. In addition, a roof intake will be provided for the traction equipment cooling air as an intake below the floor would risk being blocked by snow.

The Russian standards governing mechanical strength call for special stability and vibration tests to be carried out, and a buffing impact test will also be needed.

A characteristic feature of the Velaro end car is its narrow shape that is streamlined to give good aerodynamic performance at high speed. This was possible as both Deutsche Bahn and Spanish National Railways had specified a cab with a single operator.

However, the Russian standards require that space be provided for an assistant driver. In addition, as with the UIC651 requirements in Europe, the driver's console has to permit operation from a standing position.

For this reason, a major challenge confronting the designers was how to retain as much of the aerodynamically optimised shape of the end car as possible, while at the same time enabling the driver to operate the console standing up. The result is shown in Fig 2.

Further challenges arising during the development phase include compliance with the Russian electromagnetic compatibility regulations for the radio equipment and operations control system as well as compliance with sanitary and hygiene laws.