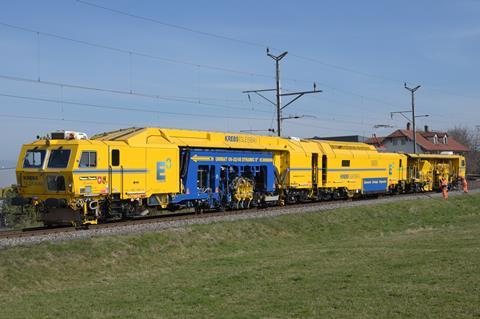 GERMANY: The Federal Railway Office has authorised unrestricted use of a dual-mode continuous-action tamping machine. Operated by Krebs Gleisbau, the Unimat 09-32/4S Dynamic E3 universal tamper from Plasser & Theurer was previously approved for operation in Austria and Switzerland. It can now be used in either electric or diesel-hydraulic mode in Germany, where it is also permitted to travel to and from worksites using electric power.

The Unimat 09-32/4S Dynamic E3 operated by Krebs was the third machine with a dual-mode power module to be built by Plasser & Theurer. Handed over to Krebs Gleisbau at the InnoTrans trade fair in Berlin in 2016, it has since been used to maintain tracks on Swiss Federal Railways under a 10-year contract. So far it has been able to operate in electric mode for more than 80% of the time, avoiding an estimated 125 tonnes of CO2 emissions a year. The supplier says hourly operating costs are noticeably lower than with a comparable universal tamping machine powered solely by diesel engines.

Krebs Gleisbau says that the next tamper it acquires ‘will be an E3 machine’.