Eurotunnel has completed installation of the first of two pairs of SAFE fire-fighting points designed to suppress fires on lorry shuttles. Richard Hope reports from inside the Channel Tunnel. 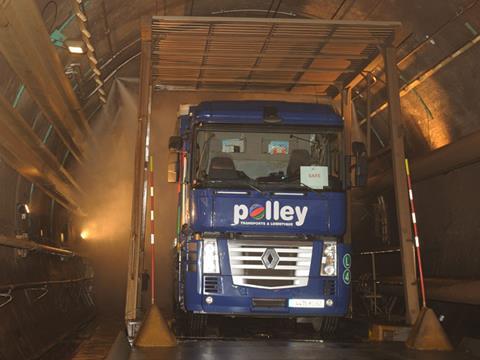 An unusual media event took place in the Channel Tunnel on February 1, when journalists and TV crews were taken 18 km into the tunnel to inspect the prototype Stations d'Attaque du FEu fire suppression station in Interval 3 of the south running tunnel (the central section between the two cross-over points).

Eurotunnel Chairman & Chief Executive Jacques Gounon explained that SAFE is the key element of Project Salamander launched after the fire on a lorry shuttle in 2008, which followed a similar event in 1996. Other measures aimed at preventing fires starting, include a team of 24 Platform Safety Controllers armed with hot-spot detectors who inspect every lorry before a shuttle departs.

The SAFE fire suppression stations are being installed mainly to tackle lorry fires on shuttles which have twice caused serious damage to the concrete tunnel lining as the air temperature reached 1 000°C. Fire crews tackling the 2008 fire could not prevent all 30 lorries on the shuttle from being burnt out because most of the water aimed at the fire ran off onto the track.

SAFE relies on smaller quantities of water delivered at high pressure through nozzles high on both sides of the tunnel lining that produce a mist of micro-droplets. These quickly turn into steam in a fire, and should reduce the air temperature from 900°C to below 250°C in less than 3 min.

Thus 1 litre of water produces 1·65 m³ of steam which displaces air and the oxygen needed to support combustion. Yet the same mist can be breathed in without harm.

After successful trials in Spain, the prototype SAFE station was tested in November 2010 and approved. Eurotunnel has now committed to constructing this year two pairs of SAFE stations close to the ends of the Intervals 3 and 4 at a total cost of €20m.

The equipment is being supplied by Fogtec of Germany, whose Managing Director Dirk Sprakel said 'it really is new technology'. Although this is the first Fogtec application in a rail tunnel, the water-based fire suppression system has been supplied for passenger saloons and equipment compartments on rail vehicles including Stadler EMUs for Swiss Federal Railways, Bombardier locomotives for New Jersey Transit and Alstom's AGV high-speed demonstrator train.

Each SAFE station will be 870 m long, sufficient to provide a margin of error when a 800 m lorry shuttle train is brought to a stop. Heat detectors in the tunnel roof will automatically open the mist nozzles within one or more of 29 sections. Each of these is 30 m long with 15 nozzles on either side of the train.

The most costly part of the SAFE programme is the excavation of four equipment rooms from the sides of the service tunnel, each housing two 250 kW motors driving a high-pressure pump. These rooms are located between the service tunnel and the running tunnels, and are similar in size to the cross-passages used for evacuation.

The SAFE stations can draw water from any of the four pumps, but normally three would be sufficient depending on the number of 30 m sections activated by the heat sensors.