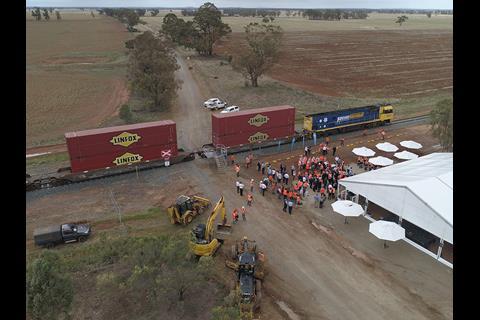 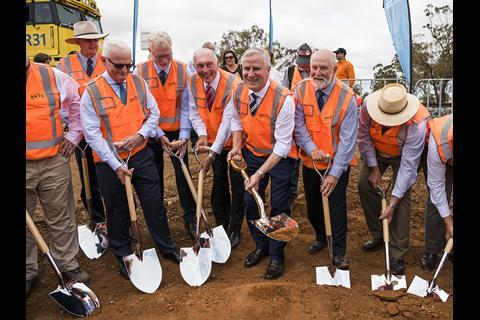 Scheduled to be completed in 2025, the Inland Rail project includes the construction of 600 km of new alignment and the upgrading of 1 100 km of existing line. The Melbourne – Brisbane transit time would be under 24 h, competitive with road haulage, and the Australasian Railway Association said the line would significantly improve capacity, allow north-south freight movements to bypass Sydney, and would provide environmental and safety benefits by removing lorry movements from roads.

The project is being undertaken in 13 sections, with one in Victoria, seven in NSW and five in Queensland. The national government has committed A$9·3bn for construction, with additional funding expected to come from private sector.

The infrastructure is being designed to accommodate double-stack trains up to 1 800 m long. It will include what infrastructure manager ARTC says will be the largest diameter diesel freight tunnel in the southern hemisphere, passing through the Toowoomba Range in Queensland.

The ceremony in Parkes marked the start of construction of the first 5·3 km of new line, which has been bundled with the upgrade of 98 km of the existing route between Parkes and Narromine. A construction contract worth more than A$300m has been awarded to INLink joint venture, while Calvani Crushing and Ausrock Quarries have a A$7m contract to supply ballast and Rocla a A$20m contract to provide 200 000 concrete sleepers. Liberty OneSteel Whyalla Steelworks has already started to supply 14 000 tonnes of rail under a A$20m contract.

‘The sod-turn for Inland Rail is a significant, momentous occasion and it’s fitting to celebrate it at the site where the first greenfield section of Inland Rail will be built’, said ARTC CEO John Fullerton. ‘When Inland Rail is operational, Parkes will be an important hub with double-stacked, 1 800 m trains connecting west to Perth and Adelaide and along the east coast between Melbourne and Brisbane.’

Inland Rail CEO Richard Wankmuller said the line would provide ‘a more resilient rail network, with multiple pathways to meet the needs of our customers while also providing flexibility for our farmers by connecting to existing regional freight lines.’