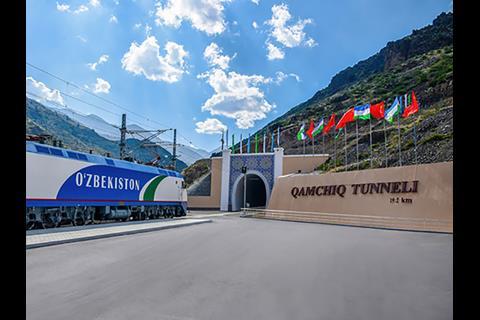 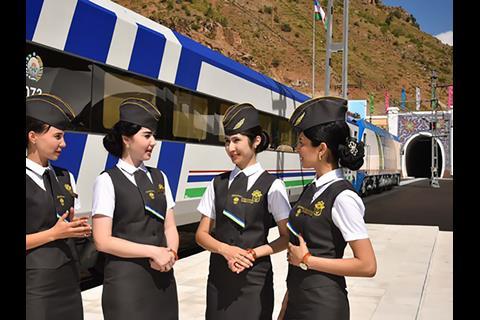 UZBEKISTAN: The 123·1 km Angren – Pap railway which provides a direct link between Toshkent and the Ferghana Valley was officially opened by the presidents of Uzbekistan and China on June 22.

The opening ceremony was held at the Uzexpocentre in Toshkent with a video link to the 19·2 km Qamchiq Tunnel, the longest in the 1 520 mm gauge region and the key element of the project. The inaugural train from Angren to Pap was formed of a Chinese-built O’zbekiston electric locomotive and four coaches, and passed through the tunnel in 16 mins.

The Qamchiq Tunnel avoids the need for Uzbek trains to transit Tajikistan to reach the Ferghana Valley, and provides an all-weather alternative to the road over the 2 267 m high pass. It was built by China Railway Tunnel Group and local subcontractors SPMS-1, Mostootryad-67, PDM Bukhara, Gidrospecstry, Shahtostroy, Husan kon Mukhandis, SUV-75 and ToshSUBVR at a cost of US$455m. The main bore carries a single-track railway electrified at 3 kV DC, with a smaller second bore for emergency evacuation.

The line also includes 25 bridges and six viaducts with a total length of 2·1 km, and four stations at Orzu, Kul, Temiryulobod and Kushminor.

Freight traffic is forecast to be around 10 million tonnes/year, with passenger numbers expected to reach around 600 000 in the first year of operation.

The total cost of the project was US$1·63bn. The majority of the US$1·44bn cost of the civil works was funded by the Uzbek government, with China Exim Bank providing US$350m. The World Bank provided a 25-year loan worth US$195m to finance electrification and signalling (US$154m), power supplies (US$35m), technical assistance (US$1·5m) and implementation support (US$4·5m).