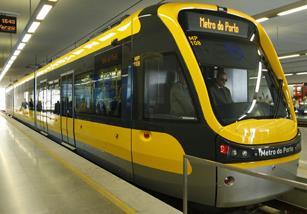 PORTUGAL: The ViaPORTO consortium has been awarded a €170m contract to operate and maintain the Metro do Porto light rail network for five years from April 1.

The unsuccessful bidders were Veolia and an Efacec/Transdev joint venture. Transdev currently operates the network for Normetro, the consortium which received the contract to design, build, operate and maintain Phase 1 of Metro do Porto in December 1998. Opened from 2002, the standard-gauge network now covers five lines totalling 60 route-km and 70 stations and carries 50 million passengers a year.

To satisfy demand on the network, 30 Bombardier Flexity Swift LRVs entered service on January 8. From February 1 the Red Line will be worked exclusively by the new vehicles, releasing Eurotrams to provide more capacity on the Blue and Green lines.

* In November a €22·8m contract was awarded to Bento Pedroso - Construções SA to build the 600 m Yellow Line extension between D João II and Santo Ovídio, which is due for completion in early 2011.