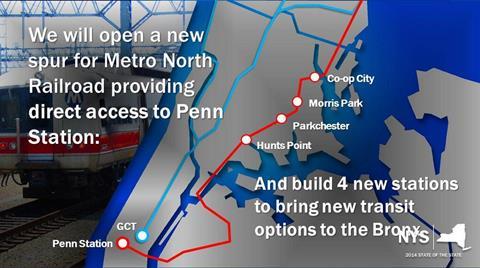 Provisionally costed at around $1bn, the Penn Station Access proposal has been under consideration by New York MTA for some years as a means of providing more capacity and resilience on the Metro-North network. Currently all Metro-North services use Grand Central Terminal as their Manhattan terminus, but sharing the Northeast Corridor with Amtrak trains south of New Rochelle Junction would enable some New Haven Line trains to serve Penn Station instead.

Subject to funding being finalised, the change could be implemented from 2019, when the East Side Access project to build a deep-level station at Grand Central for MTA’s other commuter rail subsidiary, Long Island Rail Road, is due to be completed. This would then release some of LIRR’s current paths at Penn Station for use by Metro-North.

Cuomo indicated that Penn Station Access would provide for the construction of four new stations in an area of the east Bronx poorly served by public transport. These would be built at Co-op City, Morris Park, Parkchester and Hunts Point as a means to spur transit-oriented development.