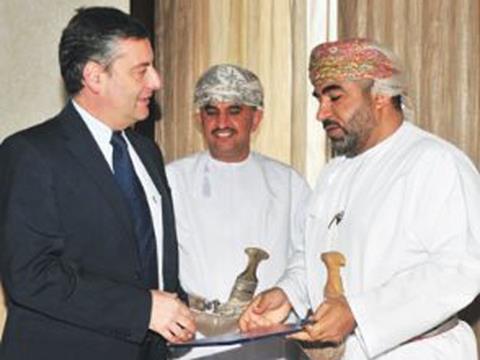 OMAN: Three contracts for the development of the planned 2 244 km national railway network were signed by Minister of Transport & Communications Dr Ahmed bin Mohammed al-Futaisi on February 5. The state budget has allocated 1bn rial for works this year, with the entire network linking six cities to the UAE border at Al Buraymi near Al Aïn estimated to cost up to 6bn rial.

Italferr has been formally awarded a 13·6m rial two-year contract to provide preliminary design engineering services. The Italian state railway's consultancy business had been selected for the contract last year, and design and survey work is already underway.

Abu Timam Grant Thornton has been awarded a 0·3m rial contract to advise on the structure of state-owned project promoter Oman Railway Co, while Dar Al-Takween has a 0·1m rial contract to develop a brand identity for the railway.

Bids for a project management consultancy contract have been submitted by consortia led by Parsons Brinkerhoff, Técnicas Reunidas, Hill International, Dohwa Engineering and Parsons International. The winner is expected to be named shortly, enabling the start during March of the pre-qualification process for two design and build contracts covering civil works and railway systems on the initial 171 km route from Al Buraymi to the port of Sohar. The railway systems supplier would act as a subcontractor to the civils contractor. Oman Rail Co aims to call tenders in August and award the contracts by the end of this year, ready for construction to start in the first quarter of 2015 for completion in 2018.

The rail network is to be developed in nine phases, and companies which prequalify for the initial phase will automatically prequalify to bid for any subsequent phases tendered within four years. These are expected to include a line from Al Buraymi to Ibri, Sanaw and the port of Daqm.