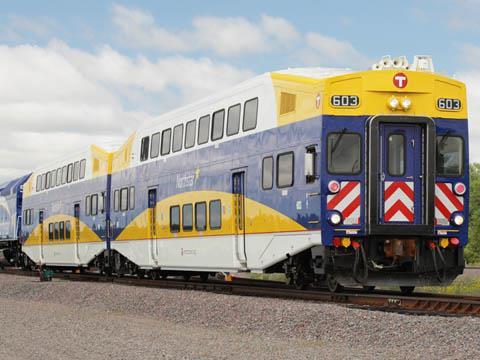 USA: Northstar commuter rail services between Big Lake and Target Field in downtown Minneapolis were launched on November 14, with celebrations at the six stations. Free rides were offered, with most of the tickets distributed by lottery.

Revenue operations on the 64 km route began on November 16, with five services towards the city in the morning and back in the evening, plus one reverse commute trip in each peak. There were around 2 400 passenger-journeys on the first day, 70% of the average weekday ridership expected during the first year.

Planning for the US$317m project began in the 1980s, intensifying in 1997 when the Northstar Corridor Development Authority was established. An agreement was signed with track owner BNSF Railway in 2007 and a US$161·9m full funding grant agreement was awarded by the Federal Transit Administration. Local funding was provided by the state of Minnesota, three counties, the Metropolitan Council and the Minnesota Twins baseball team.

Planning continues on the second phase which will run 68 km to St Cloud. This was originally included in the project but had to be eliminated because it failed to meet the FTA’s cost-per-rider index.