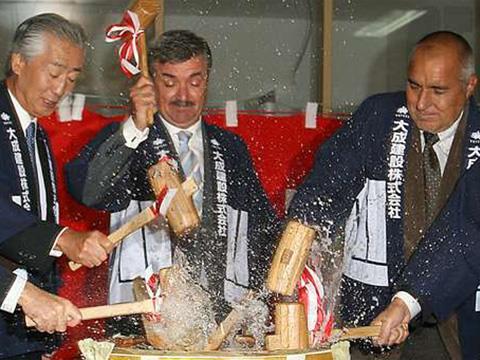 The 2 km link between Serdika and Vasil Levski National Stadium joins the initial Obelya - Serdika section of the metro with the route from Mladost 1 to Vasil Levski where an isolated service was launched in May.

Construction of the link was financed by the Bulgarian government through a €90m long-term loan from Japan. After the ribbon-cutting, officials took part in the traditional Japanese ritual of Kagami Biraki, which involves breaking a cask of sake using wooden hammers.

The new section includes one intermediate station, St Kliment Ohridski, 12 m below ground near Sofia University. The station is expected to handle high levels of traffic, and has eight entrances serving the ring road, Vasil Levski Boulevard and the university.

Construction of a further extension from Mladost 1 to the International Exhibition Center on Tsarigradsko Shose began on July 2 for completion in 2012. The €94m project includes 2·5 km of tunnel, one station and a car park.